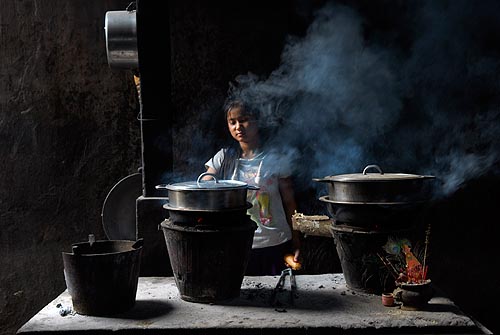 Sokheng is 16. She grew up in Prey Veng province but left home to work in a bread factory, cooking meals for 20 or 30 sweaty, hungry young men who make the little baguettes sold everywhere on Phnom Penh’s streets. She tends the charcoal fires in a dark nook beside the blazing ovens that inspire magic: several times a day, steaming, crackling, hot loaves of bread tumble from those ovens in a gush of heat. Though everyone here makes bread, no one really eats it. They eat the food that brought them through childhood on the farm: rice, fish, soup, curry. “That’s bread, this is rice. I don’t eat bread. I eat rice. Everyone here does,” Sokheng tells me.

Check back later this week for a story on this factory, a photographic miracle of light. Such a striking place with such tough stories (and such a luscious scent of fresh-baked bread). But first, I wanted to run this little snippet of Sokheng’s life because Monday is International Women’s Day, a holiday recognized and celebrated far more openly in Asia than it is back home in the States. Barely a woman herself, Sokheng, like so many others, has pretty much skipped adolescence and jumped straight into the rigors of the adult working world.

In this way, she differs from the global norm. She lives and works on site and gets paid a daily wage. She does not work in the field or the shop or the office, then return to her family to work her second job at home. Worldwide, women make up 46 percent of the statistically recognized workforce (a.k.a. paid labor). We’ve all heard about the wage-related gender gap—women get paid 16 percent less than men—but of equal concern is what UN Secretary-General Ban Ki-moon calls the “invisible and unmeasured” work for which women get little or no recognition. We’re talking cooking, cleaning, caregiving and all the other household chores that deprive women of education, sleep, and outside jobs that pay (and subject women to the increased risks of respiratory illness, thanks to indoor air pollution). This issue is not confined to the developing world. By some estimates, European women spend twice as many hours doing household chores than their male partners. Take a look at a survey of American time use, and you’ll see the same holds true across the Atlantic, too.

So here’s something to note. This is a blog about food, with a great many pages devoted to the wonderful stuff I find in the market, cook in my kitchen and put in my mouth. True, I do spend a lot of time examining other corners of life, and I admittedly find food stories far more fascinating when coupled with the people behind them. But when I sit down to dinner (and Jerry can vouch), I’m savoring flavors and dissecting recipes and examining all the mysteries that mingle with my mouth. And that’s a luxury—to spend so much time and brainpower thinking, researching and dwelling on food because that is what I choose.

I say this because the vast majority of people I interview about food cook because they must. It’s a chore, it’s what they do, and despite my fascination with their creations, they frequently find nothing remarkable about them. My mother has cooked through her entire married life, and she’d rather not. Certainly, there are chefs and “foodies” and plenty of people I meet who share my obsessions with all things edible. But the Khmer woman who fries her fish and serves it with green mango? The Kuy villager who tromps through fields and returns home with a bundle of bitter greens? The Naga woman who cooks her chiles in ash and makes tree-tomato chutney? The Timorese fisherman who grills giant tunas with garlic? Inevitably, when I start asking questions, the answer is: “It’s normal, it’s “everyday food,” it’s what they do—and they eye me in a way that says they’re unaccustomed to such attention to their work. Though a little bit mystified, they are pleased with my interest in what they perceive to be, simply, life.

So this is what I’m thinking about on International Women’s Day 2010: all the women, all the world over, who cook our food for work, not pleasure. The women who tend the fires and clean the stoves and turn out nourishing things to eat, day after day, because cooking is what they do—and they have never really envisioned another life. Thank you for your work. You have fed me fully, and fed me well.

9 replies on “Honoring the Women Who Feed Us”

Thank you, Karen,
for your keen observations and glimpse into this woman’s life. It’s got me thinking about the women in my life who cooked and cared for me, specifically my mother and sister.
Francine

It’s a wonderful photo and story. I just want to say, though I enjoy your thoughts on food, I began following your blog because of your book, Cambodia Now. It is a wonderfully written introduction to the country and people that expertly blends history, culture, and stories. You have keen insights and an eye for seeing people as they are, and all of that is much appreciated.

I’m off to Phnom Penh again on Thursday. I discovered on my last trip that the Green Mango is serving some delicious chicken pita sandwiches (spicy sauce and yogurt) for $3, a perfect lunch “to go.” I’ll stay near the Golden Gate, and I’m still in search of the best bowl of Pho in that area (maybe the Vietnamese place near the FCC?). Any quick tips…?

One more thing, I wish you’d get the “Subscribe to Comments” plugin for your blog. Then we could ask questions here and get your responses by email, rather than having to remember to check. Here’s a link in case.

Thanks. What you wrote is beautiful. We are the lucky few who can choose to make a pleasure out of an everyday chore. we just forget how much work is there every day, that we women do. Unqualified work, according to official numbers, but a work that really involves a lifelong training, and whose impact is huge.

Thanks, everyone. I don’t think I thought much about my mother’s role as household cook when I was a child. Food appeared on the table, she had made it, and that was just the way things worked. Now I understand the effort involved.

Andy, I’m working on the plugin. Soon, very soon. And thank you for your comments on Cambodia Now–I’m glad it’s still a useful book. To be honest, I don’t eat much pho in Phnom Penh. If I’m looking for casual soup, there are so many possibilities for num banh chok or other great Khmer soups, and I tend to go those routes. But also, possibly, because there is so much cultural baggage involved in the mere decision to eat Vietnamese in Phnom Penh. The decision can be seen as a political statement, and I prefer to avoid all the complications involved. So I generally stick to Khmer soup in Phnom Penh. (And I’m looking forward to a great many bowls of pho in Vietnam later this year!)

Andy – done. You may now subscribe with reckless abandon.

A heartfelt and beautifully penned post, and an incredible picture to go with it. Nice work guys. Looking forward to the bread story.

A very thoughtful post. Also, who exactly is eating all that bread?

Thanks, Claudia and Jarrett. Everyone eats this bread–it’s sold on street corners in the morning, and sidewalk vendors use these baguettes for their sandwiches. Khmer chicken curry is meant to be mopped up with a hunk of bread–definitely a sign of the French influence.

[…] sat at a table to eat with us when her husband was alive- she was constantly in the kitchen. She is one of those women who does not cook for pleasure, though she loves eating. She is a bit glutton like a child is, she […]