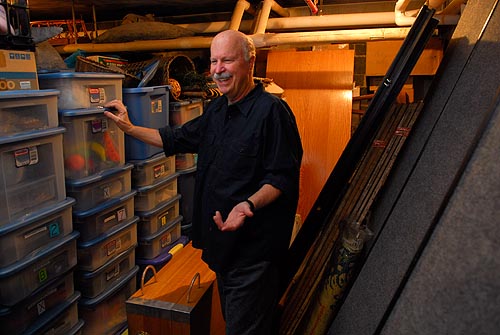 In just a few weeks, a very important man will return to Laos. His name is Jim Harris. He’s a retired school principal from rural Wisconsin. He’s the only American working in the field to clear U.S. bombs from the soil in Laos. That’s Jim in the picture above. He’s standing among his boxes and bins full of Lao artifacts, all part of his living museum (currently homeless, aside from this basement storage room) depicting daily life in Laos.

If you’ve been following the Rambling Spoon for a while, you’ll know that we’ve been documenting the effects of unexploded ordnance (UXO) remaining since the U.S. bombing campaign 40 years ago. It’s a grim situation. We met Jim a couple of years ago in Khammouane province, where he worked with a clearance team that went out every day to investigate bombs found by local villagers. (Most of those villagers are farmers, and most of the bombs were found while working in the field.) You might recall my post about a couple of phosphorous bombs that Jim’s team destroyed after local kids pointed them out in the field. Once again, here’s a photo of that detonation: 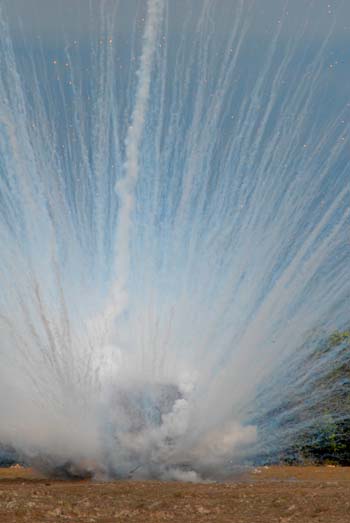 We had a chance to see Jim again a few weeks ago while investigating Hmong food on his home turf in Wausau, Wisconsin. He updated us on his plans. When Jim gets back to Laos this time, he’ll be heading into the far north, into territory where other clearance groups won’t work. In theory, Phongsali wasn’t bombed enough to warrant clearance. It’s true, just a small portion of the overall area of the province was bombed. But that southern stretch suffered a torrent of explosives that continue to hurt and kill people today. Jim’s going out there to remove the problem.

For the past several months, Jim knocked on American doors and traveled the country looking for donations to fund his work. He’s been on TV, radio and in print. He’s hoping his fellow Americans will feel moved to give since it was the U.S. government that dropped the bombs on Laos in a secret, unauthorized war decades ago. He’s raised enough money to fund a month in Laos—but not the two additional months he hopes to work.

Jim and his wife, Marty, have a website for their nonprofit, We Help War Victims. It includes a donation page.