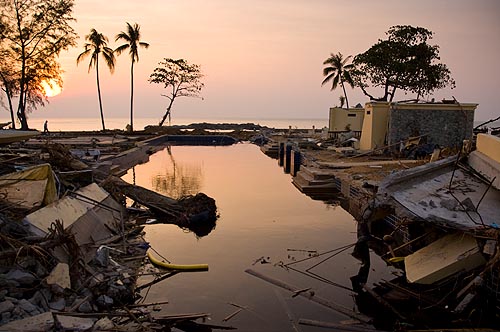 Exactly five years ago, on the morning after Christmas, an earthquake struck off the coast of Sumatra. With a magnitude surpassing 9.1, it was one of the mightiest quakes on record. It spurred a series of tsunamis that devastated parts of Asia and Africa, and it killed at least 230,000 people. Jerry and I had just spent a month in Sri Lanka, one of the hardest-hit countries. When we heard the news, we shifted our holiday plans and traveled to Phuket, in southern Thailand, to cover the aftermath. What follows is a personal essay I wrote about this reporting job. It’s the first in a two-part series. Tomorrow, I will post an essay based on my journal notes from a month of travels along Sri Lanka’s edges, before Mother Nature altered the coastline forever.

I can’t kill the stench, can’t stand the reek of my clothes. I smell like rotting bodies, like the bloated corpses that lie in heaps here at Wat Bang Muang. Death smothers the temple and eats through its shine.

Some of the victims are covered, hundreds are not. They don’t look real, faces so puffed, tongues extended, bellies distended, breasts and penises erect. I see a child with maggots in the gut, a woman with a gash in the breast. Dry ice swirls in eerie loops. 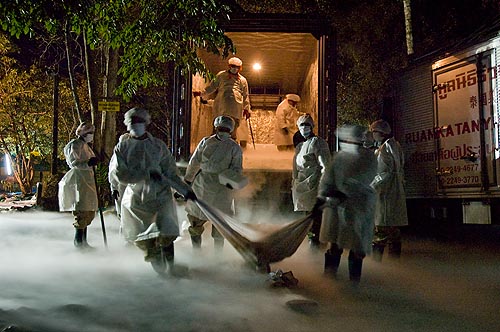 Workers tiptoe through these morbid avenues yelling “falang” when they identify a foreign corpse. Shell-shocked survivors scrutinize the piles. The bodies are no longer people. They are not humans, no life, nothing — absolutely nothing — of a loved one’s being. They are bloat and rot and food for scavengers. I understand the longing, the wanting to know what happened, the desire to bring a body home across miles of ocean to a family in waiting. But nothing remains of these people. Ashes to ashes, dust to dust, they are returning to the same Mother Nature that killed them.

This is Khao Lak, January 2005. Jerry and I are here to write this story, photograph this news. On Christmas Day, thousands made merry on the beachfronts of southern Thailand, sunning and sailing and smiling for cameras, with the backdrop of bliss all around. The next day, everything changed. Death gushed through the door and broke it down. We’re supposed to look at the remains and somehow assemble them, sanitize them, for family readers back home. Editors don’t want feelings and opinions in the face of gore. They want truth without the tears.

Yet reporters do cry. I’ve seen it many times.

“If you do not see the reality, you will never understand what happened here,” an Austrian volunteer named Walter Dreier tells me. His vacation has turned into a search-and-rescue mission. For days, he picks through rubble, looking for Austrians buried in sand. He finds identification papers for two people, no more.

It’s a reporter’s bitter struggle — my struggle — to convey the visceral feelings aroused by a wave that killed a quarter million people. It was nature, unbiased, invoking random selection. Pictures and words alone don’t always work. They don’t translate smells or sounds or the overwhelming clench of desperation.

The sewers in town stink of death. I step over a manhole and I smell the temple; I smell my clothes, my hair, my bag, all over again.

I smell sad irony, too: The airport is warm and flowery, like paradise, like it should be. But the tarmac is stacked with coffins. 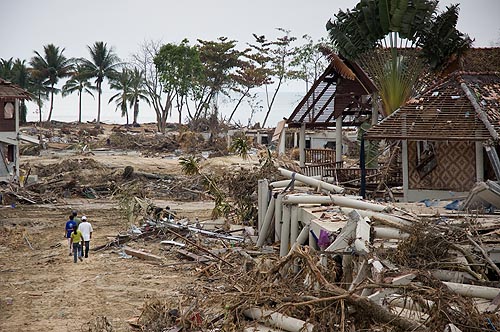 Remnants of a Khao Lak resort

I hear it: Calm waters lap against placid shores. A red sun slips over a docile ocean, as stunning a view as ever. But strips of metal dangle from a ceiling, creaking in an creepy wind, as bulldozers crush their way through mountains of rubble. In some spared spots, little lizards rustle through lush vegetation. In others, nothing green remains. We wake one morning to helicopters thundering round and round. It’s the drone of disaster.

I taste grief in sweet tangerines and greasy fried chicken, offered freely by hundreds of men and women toiling over bubbling woks. They’ve volunteered to feed the workers and journalists who have flooded this island. The cooks are happy to give but heartbroken for the reasons why.

I come to understand this catastrophe through the absence of sensation, too. I walk one night, alone, along the beach in Patong. It’s a black cavity of nothing — nothing of what was here before. Think of Waikiki, snuffed of life. Bricks are stacked to be made into sidewalks again. The road is open, the debris mostly cleared. But no lights, no people, not even dogs. Step two blocks inland and the beer flows, the music thumps, in near-empty bars. All the customers are scared away — or gone to another life.

On Khao Lak beach, the waves pulverized everything in their paths, turning high-end resorts into piles of refuse. Everything is where it shouldn’t be. Doors and windows litter the ground. An overturned truck rests in a hotel lobby. Electric wires lay in ditches. Concrete posts are snapped in half. A tree sprouts from the broken windshield of a vehicle stuck in mud. 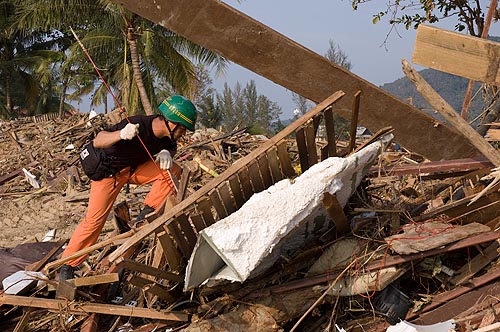 Rescue worker searching through the rubble of a Khao Lak resort

Rescue workers pick through the detritus. It’s meticulous work by hand, down in the sand. A man from Singapore digs through broken wood and concrete, pawing carefully, sniffing for the telltale smell of human remains. He is momentarily drawn to a curious spot, but his boss tells him never mind — it’s only the odor of rotten fish.

Up the beach a bit, Jerry and I watch a Korean team going through similar motions. They find a backpack and spill its contents: a wallet, a cell phone, medications, lipstick. It belonged to a woman, that’s all they can discern. The team has found 11 bodies and one leg in five days. The workers doubt they’ll find more. They’re moving north, where the tsunami wiped out an entire fishing village.

Evidence of the missing surfaces in tattered bits — a photocopy of Toth Ildiko’s Hungarian passport, a March 1 Turkish Airlines boarding pass from Bangkok to Istanbul in Oliver Gutzke’s name.

Miles inland, there is life—lights, voices, movement, progress. The living keep going. But on Khao Lak beach, there is only the sea against the sounds of searching. It is overwhelming, and it shows on every face here. The tragedy lives behind every little white mask.

Most unnerving are the third-floor rooms of a Khao Lak resort, left as they were that morning. Jerry and I climb the dirty stairs. We see what life was like just moments before, as though we’re traipsing through time. We find an open tin of mackerel, a glass of grape juice, John Grisham at the bedside. The next room over has crayons and dolls spread across a table. On the floor sits a survey measuring “the opinions of international tourists toward Khao Lak.”

In another room, we try to guess the course of events: The female occupant went swimming, met the first wave and lived. She ran to the room, kicked in the door, grabbed a few items and fled. She left little spots of blood on the bed.

We come to know the missing: One family had kids, one guest had a cold. Someone loved tea, another liked silk, someone else took expensive care of her hair and skin. These rooms harbor little freeze-frames of life before it vanished.

When people need more answers, they visit “the wall,” an hour away in Phuket town. It’s a sobering corridor of photos and fliers and phone numbers, lists of dead and injured, places last seen and pleas for help. It’s the only information available. Everything else is sealed in coffins or scattered through unknown graves of sand.

Workers here answer the phones 24 hours a day. It is chokingly sad to talk with the volunteers, the people who field these calls from hither and yon. A young woman named So Pida fetches a list of names and the resorts where they stayed. Most all the way down the page it reads: Khao Lak, Khao Lak, Khao Lak. “We work all day, all night. We cannot sleep,” she tells me. Only ten times have people called her back to say they found their loved ones alive.

I write about So Pida, the wall, the bodies at Bang Muang. I write many paragraphs, yet the words don’t suffice. I can’t find adequate imagery for the things that haunt my head, for the details unbefitting a family newspaper back home.

Instead, I drink a beer and my thoughts turn to puddles. It’s the same for Walter, the Austrian volunteer. After five days, he removes his mask and takes a break. He can’t go back to those dreadful beaches, he says. “Last night I thought, ‘I have to go out, I have to drink some beers.'” But he couldn’t even drown in an alcoholic elixir.

Walter can’t shake the images, so he changes his mind and vows to search through sand again. “I have to,” he tells me, with tiny tears misting his eyes.

And I have to look away. My eyes are equally blurred. 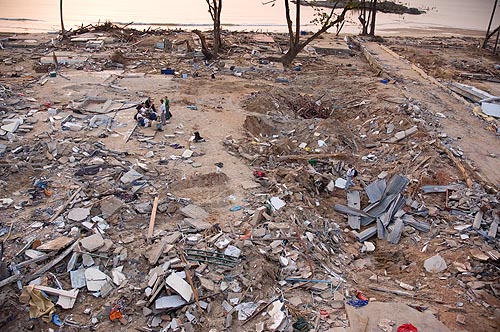 2 replies on “Remembering the Tsunami: Part I”

My god–these words and these photos tear out my heart.

Amazing story that places me there, as if it just happened.
Evoking such detail in images, sounds, smells, emotions..it’s evident that dreadful disaster is etched into Karen’s memory. This is a side of the story worth telling because all too often the realities of life, death, disaster and war are sugar-coated for public consumption.