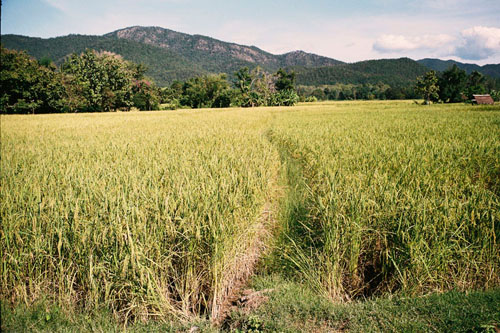 View of the rice fields around Doi Saket, in northern Thailand.

In winter, northern Thailand wakes to a cloak of fog. Cool mountain air flushes down the mountains through dry, golden valleys. Straw hats bob through the fields as men, women and children stoop to the earth.

It’s rice harvest season, but it’s not as it used to be. These days, you will find more hired Burmese laborers, and fewer Thais working the fields. More lands with mini-mansions, and fewer producing food. More mechanical plows, and fewer animals. 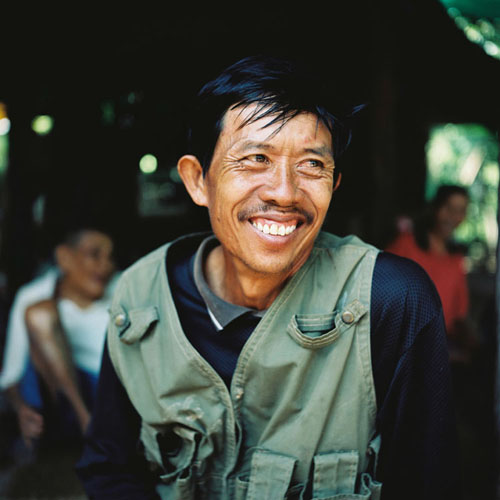 Thai rice farmer Dej smiles in the common area beneath his family home. He works the same fields his father did, but is struggling to keep up with expensive modern practices. He now must work extra jobs outside the home to make ends meet.

We have a friend and colleague who lives in a stunningly beautiful Thai house whose porch opens directly onto the fields and mountains of Doi Saket. A while back we met her neighbors, a family of longtime farmers who spoke to us of big changes in their world.

“I was the last one to have a buffalo in this village,” said Khun Dej, the 51-year-old son of 90-something parents who had farmed in this area for decades. They all lived in a little wooden house on stilts amid chickens, papayas and bamboo. The family’s 3 acres supported three generations of this family. 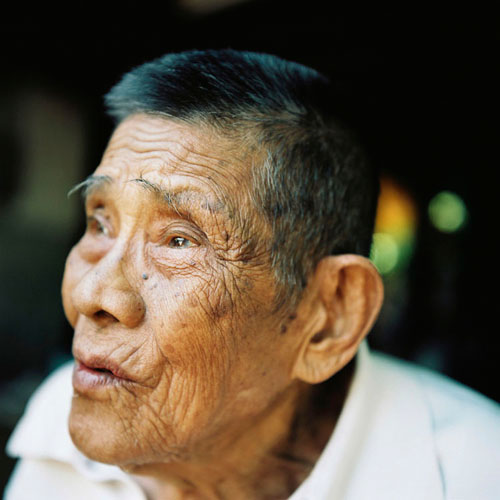 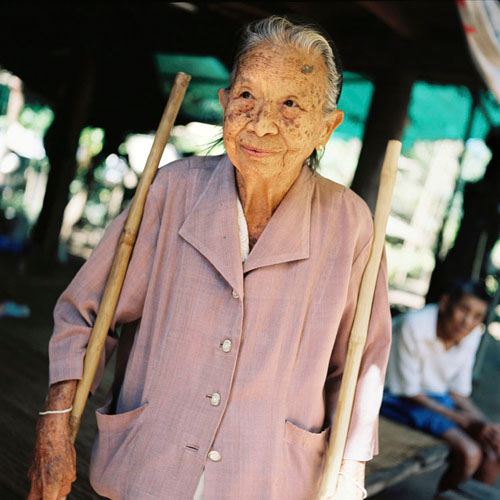 Portraits of Tan (top) and Poot, parents of farmer Dej. They have lived most their lives on the rice farm their son now struggles to maintain.

“When I was young and went to plow, we always used buffalo and no machine,” Dej said. “Every house had their field and we helped each other—today we work this land, tomorrow we work that land.” But times changed.

About 10 years ago, villagers began selling their buffalo and buying plows. “In one day, a buffalo can work only two times, in the morning and in the afternoon. But the machine can work all day and it’s faster,” Dej explained. Modern machinery allows farmers the time for a second job, a necessity in today’s economy. Every year, Dej plants two rice crops. The first, he keeps to feed his family. The second, he sells for about 10,000 baht (about $300). Not much for an annual income.

Hence, Dej had planned to sell the beloved family buffalo, Mut, when she grew too old to work. “I didn’t want to sell her but I didn’t know what to do.” The meat on such an animal could garner 20,000 baht (close to $600). Dej could use the money to buy a plow.

But Mut was saved just in time, by my colleague, who offered to pay for her upkeep in a nearby field now named “The Home for Elderly Buffalo.” Dej bought his plow and started spending more time at a second job growing lemons and pomelos, while Mut retired in peace.

But the story didn’t end happily ever after. While Mut lazed in countryside breezes, Dej said he worried about rising prices. “In the past, there was no need to use much money for life,” he said. The rice harvest provided enough to sustain a family. “But nowadays, everything is expensive. Especially the petrol to feed his plow (Mut never needed such pricey food). “If we consider the expense,” he said, “the buffalo is better because there’s no need to buy fuel.”

Dej wished he could return to the olden days. “I cannot earn a lot because of fuel prices,” he said. “I want to use buffalo again. Buffalo is better.” 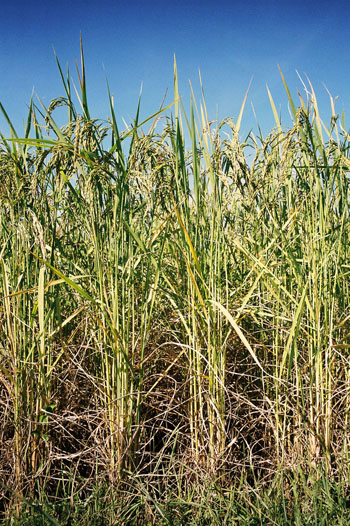 View of the family’s rice in the field.

3 replies on “Bring Back the Buffalo”

Sounds like a whole series of very interesting changes are under way – immigrant labour, mechanisation, rising prices. You didn’t mention larger holdings – is that happening too? And in Cambodia the Kuwaitis have recently started buying up farmland – I guess Cambodian farmers will become a kind of rural proletariat. Mind you the Kuwaitis will get far more rice per acre than the Cambodians do.

Igor Prawn, yes, although this story comes from a place of mostly small-scale farmers in northern Thailand, certainly other countries/companies are buying up farmlands in many parts of Asia. Not just rice, either. Foreign-run plantations have left many indigenous populations (especially northeastern Cambodia) without land.

In fact, the Times magazine ran an interesting article on “agro-imperialism” earlier this month:
http://www.nytimes.com/2009/11/22/magazine/22land-t.html
Mostly on Africa, but similar things are happening in Cambodia and elsewhere. While researchers aim to boost worldwide food production, the bottom line remains the same: those with money are fed while those without do not. And now they’re losing land, too.