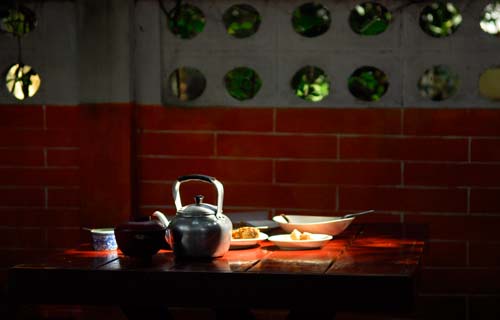 When AFAR published my laphet thote article, it ran under the headline, “A Burmese Salad that Says Welcome.” I didn’t write the title. It’s what editors inferred from the story. “Welcome” is spot-on, but love, compassion or kindness would have worked just as well.

The Burmese possess magnanimous hearts—this I learned from my students. I’m remembering the month I spent in Thailand last year teaching a group of Southeast Asian journalists, and never once did the Burmese contingent allow me to pay for their meals. None of their families had stashes of cash to spare. I wanted to pay them back, and I thought I had devised a way. During the last week of the course, I asked them to a Burmese dinner, to a restaurant I had visited while living in Chiang Mai a few years back. The place had a new owner, new menu and new name. I asked my colleagues to eat with me, and to explain everything they knew about Burmese food—because I was interested, as a journalist. Before the end, I figured, I could sneak off and pay the bill. 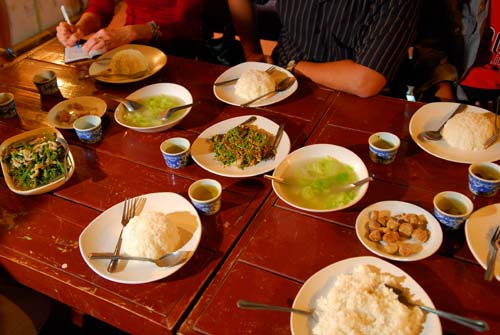 We gathered on the restaurant’s upstairs balcony and the feast began. Shredded ginger salad (gin thote) arrived with peanut, tomato and onion—spicy, pungent, nasal-clearing goodness. We talked a lot that night about a key ingredient in Burmese salads: chickpea powder, which adds the hefty graininess I have always loved.

Sauce is paramount to the pork and soybean paste (wat pone yae gyi). “The main thing is the juice. It’s better than the meat,” said P. (For protection, the Burmese asked that I not use their names or show their faces.) It’s rich, like the juice of a great steak, but spicy from green chile.

It takes several months to pickle the bamboo shoot used in Burmese pork curry (wat hmyit chin). “We have two kinds of bamboo—sour and sweet,” K explained. This is sour, and very young, he said. “Infant bamboo. Infant of the big bamboo tree.”

A pungent dish of fish paste (nga pi) arrived, surrounded by raw vegetables. “This is essential food,” Y said. “In Burmese villages, some people cannot eat a meal, so they eat this with rice and vegetables, and that’s all. Because they are poor.”

We talked of the different methods of cooking with chiles. Fish paste is mixed with fried dried chiles, but curry uses chiles dried in the sun, “no need to fry,” P said. “In Myanmar, every curry has oil, onion, ginger, garlic and salt.” 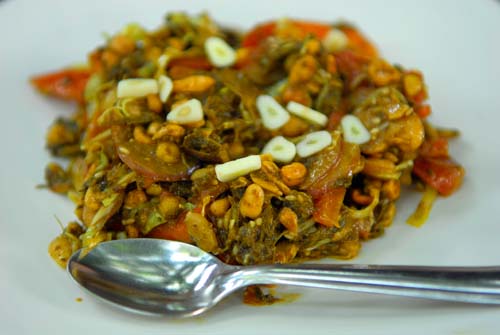 The basics of Burmese salad include fried shallot (in peanut oil), garlic mixed with onion (if you like), chickpea powder, fish paste, salt and something sour (such as tamarind or lime). P said he doesn’t cook, but he learns everything by watching his wife—and eating a lot.

In fact, the four men in this group knew as much about cooking as the single woman among them. The reason became clear toward evening’s end as H leaned toward my ear:

“Karen, I want to tell you something because I think it is useful for your story. We all know how to cook our curry because it is in our culture.” Every woman cooks, and she talks to her friends about food. Every man eavesdrops, and he learns the secrets of Burmese cooking.

I asked H his opinion of the restaurant. “Is it the real Burmese food?” He answered with a big, toothy grin. “Nearly, nearly!” Translation: It’s as good as it gets away from his wife’s home cooking.

All of us were stuffed and happy, chatting over little cups of tea. I ducked downstairs and opened my wallet, but the waitress shook her head. The bill had been paid, and I never even saw it.

What could I say?

Chezu tinbade, my friends. Someday, may your freedoms be as wide as your hearts. 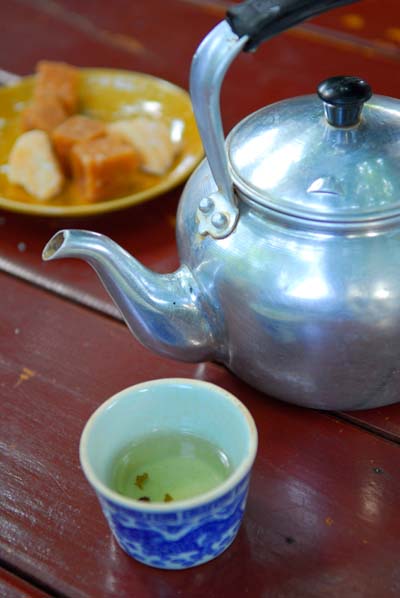 11 replies on “Generosity, a Secret to the Burmese Kitchen”

Hi,
I am a Thai living in Munich and i love reading your blog. I came across a question regarding Thai iced tea from the other post so i’d like to add something. It’s common too to just add lime juice to sweetened Thai tea (without condensed milk). It’s called ‘Cha Manao’ (literally ‘tea lime’). It’s really refreshing for people who don’t want creamy type of tea.

For all my life growing up in Thailand, i never once try Burmese food so i find your article very interesting. 😉

Adayinmunich, welcome and thanks for your comment. Yes, on particularly hot and sweaty days I can go for a cup of cha manao. But in general I prefer unsweetened tea–personal preference.
If/when you return to Thailand, seek out some of the fabulous Burmese food there!

Coincidentally, I read this the other day after going through some of our photos from Burma. You captured the hospitality and the warmth of the Burmese people so well in this piece. I miss that spirit. Thanks for bringing me back to it.

I love how you capture the spirit of the Burmese people in this piece! My husband and I are heading to Burma in 2 weeks! I’m taking notes on your suggestions! Happy traveling (and eating)!

Thanks, Tracy. Enjoy your Burma travels and let me know what you find. Please say hello to the country for me. Wish I could join you….

hello Karen, I am from Indonesia …. I’ve lived in burma for 1 year starting mid-2002, I worked as a consultant in shrimp ponds, first I feel less fit as most Burmese dishes tasted sour, but over time get used too, now I so wanted to enjoy Burmese cuisine, one that I like is a mixture of dried shrimp fried novelties, chili powder, fried onions mixed into one, I forget this name, can you give the recipe to me, I would be very grateful,,, ,,
regards

Welcome, and thanks for your question – is the dish you’re describing a salad? A fritter? I don’t have my Burmese cookbooks here with me at the moment, but I can think of a few dishes with those ingredients. Let me know if it was more like a fritter, a salad or something else…

Thank you for your response, the food was a fried dry ingredients, then just put together an extremely spicy taste, the material consists of fried onion, fried garlic, fried dried shrimp and chili powder, usually sold in stores are fried and we mix just fine …..
thanks, sorry had trouble

ok thank you so much Karen, continue to create…