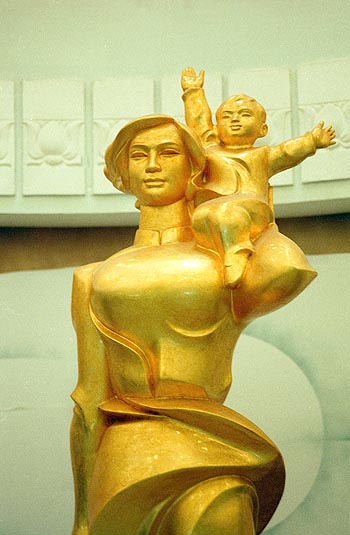 Mother of Vietnam, at the Vietnam Women’s Museum in Hanoi. The statue, nearly 12 feet tall, represents strength and beauty among Vietnamese women. She supports her child on the left shoulder and stands as a symbol of motherly love for the country.

Happy Thanksgiving, the day after. I had not a moment to post yesterday. Our holiday began before the day’s light, up in time for an annual fun run/walk organized by Michael Thomas Coffee (next to the great little yoga studio I recently joined), with proceeds benefiting the Roadrunner Food Bank. We trotted through the frosty streets of Albuquerque’s Ridgecrest neighborhood, just as the sun began to warm the west side of the Sandias.

Then home—quickly!—to the kitchen, where everything soon blurred. But I do remember every little thing that went into the menu. Thankgsiving, of course, is not about gluttonous excess; but about about family and friends, giving and sharing, and gratitude for everything we have—right? But food fosters that. Food is a catalyst for wonder. It brings disparate ideas and far-flung relatives to the same table, to indulge in an edible peace.

When the Redferns arrived yesterday afternoon, we nibbled on pickled herring (Coates family tradition), smoked Gruyere, raw-milk Swiss cheese, a marbled brick of Irish porter cheddar. And those pecans, of course, followed by a classic recipe I’d wanted to try, the bagna cauda featured in the Times a few weeks back. Our guests brought the veggies, and we dipped to our mouths’ content.

That miso-butter bird? Oh, wow, did it work. And it did take nearly an hour to rub the whole thing. I slowly pushed through slick spoonfuls of the mixture, which warmed in my hands. I’m fascinated by the physics, as fingers massaged the outside while little pockets of butter and air moved like bubbles across the turkey, beneath the skin. I don’t know how long it took to cook the 15-pounder; it seemed hours longer than the recipe had said. We kept waiting for that thermometer to rise to 170; in the end, we cranked up the heat to 400, removed the foil “tent,” and let the bird brown to a crispy finish. Inside: succulent meat, not a bit overdone. Yum.

What else? Too much, really. Joanna brought her classic citrus cranberries, Jenny did her famous stuffing (for the gluten-eating crowd). We made a mountain of wild rice, Jerry’s jubilation cornbread with melted cheese and hot chipotles, nutmeg butter greens from the Silk Road Gourmet, and sautéed green beans and Brussels sprouts with chile and mint, a recipe from the last-ever issue of Gourmet. Even the Brussels sprout haters found this one edible.

We had curried red cabbage slaw, which I’m calling my Jewish mistake. I had selected the slaw from my Jewish cookbook, and in the heat of the moment I inadvertently started cooking the book’s recipe for sweet-and-sour cabbage. The two dishes share similar ingredients, so I combined them, and made something perhaps even better—red cabbage, onion, raisins, red wine, a little sugar, powdered Burmese curry and yogurt to set the dish as it cooled in the fridge.

Lately our friend Jon has been experimenting with soup, and when he served us his latest concoction last week, I had to have the recipe for Thanksgiving. It involves steaming red onion and zucchini, then blending with roasted garlic, avocado, a bit of tamari and olive oil, salt and pepper. I also added a few spoonfuls of the bagna cauda dip. Try it.

For dessert, Jerry baked Karina’s flourless chocolate cake, a favorite in this house. To that, Joanna added her homemade pumpkin ice cream, a David Lebovitz recipe that paired exceptionally well with the cake.

Drinks? I started with a good glass of Vouvray, Jerry with the New Belgium 2 Below Ale. From there, we went local: Gruet’s Blanc de Blancs, followed by a New Mexico Imperial Kir.

Whew. I am thoroughly stuffed, even as I eat leftover cornbread with cranberry relish for breakfast this morning.

And would you believe Jerry didn’t take a single photo last night? Some nights are like that, moments we live with only the pictures in our minds for later recollection.

I am reminded my first Thanksgiving in Asia, in 1996, when I spent a semester in Hanoi, studying and working with the Vietnam Women’s Union. Part of that job entailed teaching English to guides at the Vietnam Women’s Museum, the Bao Tang Phu Nu Viet Nam. For four months, the seven of us from the University of Oregon plunged into Vietnamese life, led by friends who showed us their world. On Thanksgiving, we wanted to give them a piece of America. Together, we cooked Thanksgiving dinner—not the traditional turkey, but some of our very favorite dishes—and we served it to 60 people packed inside the Women’s Museum, beside that golden statue of Mother Vietnam, pictured above.

Somehow, I ended up with no photos from that evening, either. But not long ago, I came across the journal I kept during my semester in Hanoi. This is what I wrote after that other, extraordinary Thanksgiving (with a few random scenes of Hanoi tossed in for good measure): 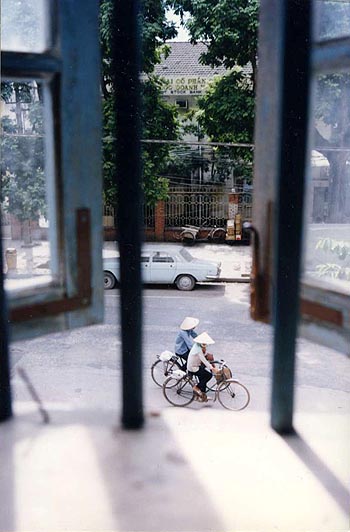 The view through my window overlooking Le Thanh Tong Street

We came together at 8:30 that morning for an entire day of chopping, stirring, dicing and frying. We made spaghetti, chile, tabouli, salad, punch and a whole lot of peace over sips of wine and dancing cleavers.

Van and Tuyet, our colleagues, were right there with us, dodging sparks from an uproarious fire and setting flowers ever so daintily on dozens of tables. And immediately after our draining day, they began cleaning and preparing the dining room for a wedding that would take place the next morning. Van planned to stay the night along with other women squatting in the kitchen, plucking birds for the boiling pots and stuffing shrimp paste into mushrooms.

I don’t know how we could have prepared dinner for 60 without all these fingers in the action. We couldn’t have, just as we couldn’t have done it without Ha’s expert tanslations. She joined us in the morning as Karen (the other Karen) and I gave our ingredient list to two women who would shop for us in the market. Miraculously, an hour or so later, a man on a motorcycle arrived with a crate of papayas, 2 kilos of tomatoes, 8 large onions, 1/2 a kilo of raisins, 1/2 kilo of cashews, 3 mangoes, big bunches of fresh herbs, a kilo of garlic, 5 kilos of beef, 5 cucumbers, 1/2 kilo of shredded carrots, 1/2 kilo of shiitake mushrooms, 1 kilo of limes, 4 pineapples and 5 logs of cinnamon—all for $30. Yes, logs of cinnamon (this was before I knew the histories and origins of cinnamon and I was surprised by the size). We asked for sticks and instead got branches two feet long and several inches thick.

After the market delivery was checked and double-checked, a girl rode up to the museum door with two huge hunks of ice strapped to her bike—half of our order. She returned half an hour later with the remainder, and we all took turns whacking it to pieces, which we threw into a 15-gallon pail of beer.

It was a beautiful day, down to the last minutes of sudsy water and many hands flailing about in a rush to clean the kitchen. Each of us had stood and spoken to our guests during dinner. I told the crowd I had never been so far from family and friends on Thanksgiving. Yet I’d never felt so close to home, either. 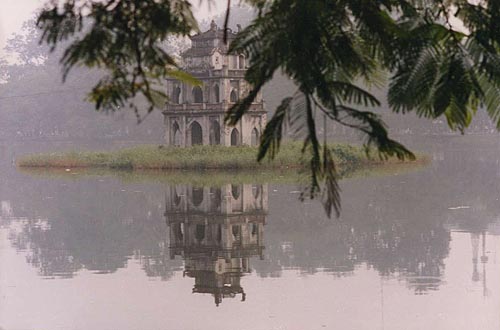 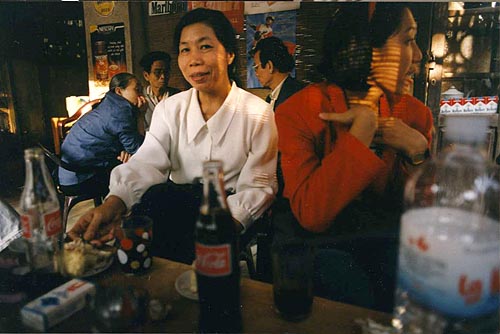 Co Phuong in her coffee shop, our favorite place for cafe sua or nuoc chanh da 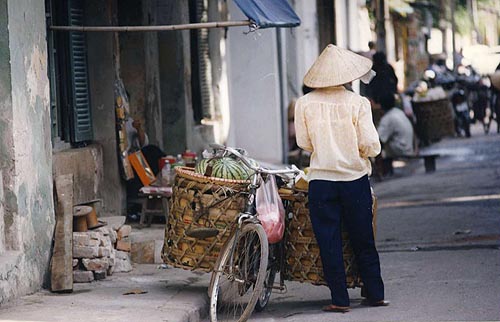 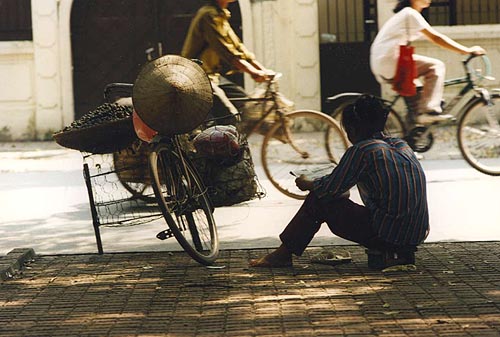 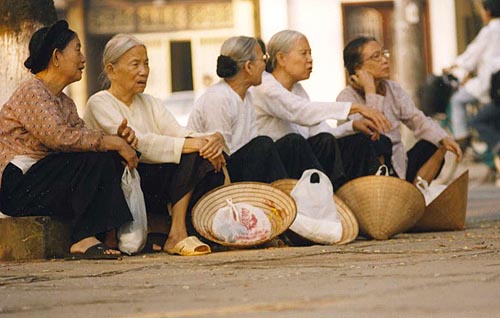 The women around the corner 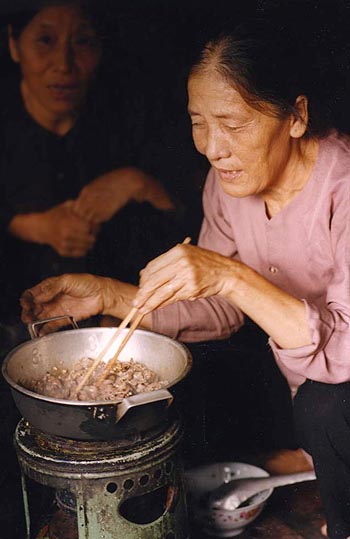 5 replies on “Here and There: Two Extraordinary Thanksgivings”

It was a fantastic meal! Rosi is still loving the soup you made today, mixed with a little yogurt it became a creamy treat. She also loved the turkey, so did the rest of us…a lovely bird!
Thank you again for all of the wonderful food!

A belated Happy Thanksgiving. Reading this really makes me want to be back in Vietnam again.

Love your stories and photography, Karen…it make me want to visit Vietnam.

Thanks, everyone. And I do recommend a trip to Vietnam!

[…] my long-ago semester in Hanoi. I remember that first broiling afternoon, and my introduction to Co Phuong, who ran the drink shop on the ground floor of the Ministry of Education Hotel (my four-month home […]