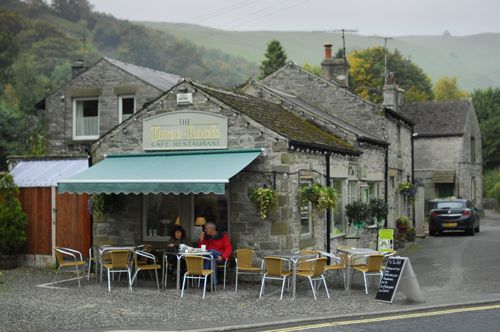 A cool afternoon tea in a remodeled stone home at Castleton, Derbyshire.

When Condé Nast shuttered Gourmet last month, the move actually opened a drawerful of opportunity for me—entire files and folders of material left undone, unpublished, unseen by readers. As with any magazine, articles and ideas get stashed in mysterious corners, some never to surface again. It’s just the way this business goes. Ever since Gourmet.com appeared online, it was part of my job to feed the site. Sometimes I’d send my editor a list of ideas; other times, when I felt a deep-down urge, I’d scribble something from the moment and send it off, straight away. And sometimes, I’d hold an idea for a time more appropriate. Some such pieces would never run, for reasons of timing or space or mood (all magazines are moody: sometimes something works, sometimes something doesn’t, and sometimes something doesn’t today—though it might tomorrow). None of this necessarily detracts from a narrative’s merit.

What I’m saying is this: I have on my desktop a big, fat package of ideas that were, at one time, intended for other places. But now, periodically, I’ll be posting those narratives right here. Let us begin in Derbyshire:

First, get yourself an A and G, distant cousins who double as the dandiest of tour guides. They greet you at the Derby Railway Station, stuff you into their little black car, and whisk you to a countryside literary barn. It’s known as Brierlow Bar, advertised as England’s biggest bargain bookstore—and its highest, at 1,075 feet in elevation.

Get your books, then head to nearby Buxton, on old spa town built by the Romans just after Jesus’s time. Healing waters spurt from St. Anne’s Well, where believers gather with plastic bottles.

Moving along, through a misty mountainous drive, Castleton beckons just as hunger riles your stomach and goosebumps prickle your skin. Skip the hilltop castle and choose instead a warm seat inside The George, a homey little inn offering watercress soup, steamy and predictably green. Still chilled? Try a half pint of John Smith’s Extra Smooth. It will put you in the perfect mood for a walk along a babbling brook, past stone-walled cottages toward the mouth of the Devil’s Arse (it’s a cave). 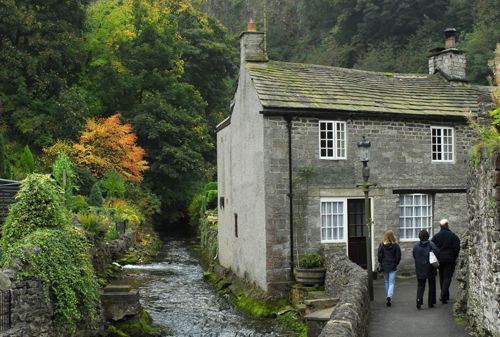 Taking an afternoon stroll past the old stone homes of Castleton, leading toward the Devil’s Arse.

Not much time to linger, though. You’re off to the “Plague Village” of Eyam, to which the dreaded disease arrived in a bundle of cloth in 1665. Pay your respects at the church, then wander the town, where buildings bear signs with the names of the dead and the dates they succumbed: “John Torre died here 29th July 1666. Godfrey, his son, aged 8 months died 3rd Aug 1666. His wife, Joan, survived.” 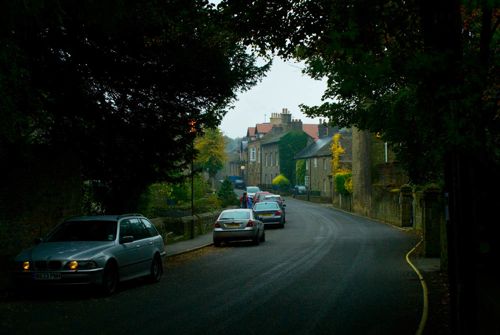 Eyam, infamous for its plague history and stories from the 17th century, today is a quiet village, perfect for wandering.

Choose dinner in Derby to escape the gloom. La Tasca’s wine and lively décor soon remove all memory of the grim reaper (just don’t tell A and G the paella could do better). Afterward, stroll the ancient sidewalks and acquaint yourself with the local ghosts. Catch last call at The Brunswick, and be sure to try the porter. Then head to bed, for morning shall arrive early. 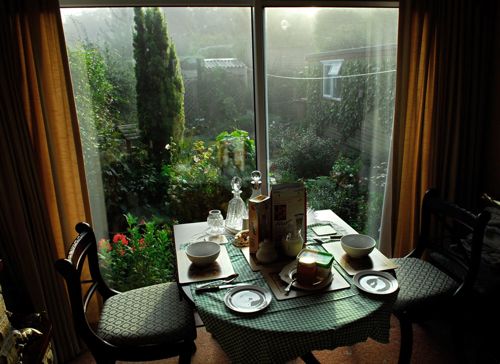 If you’re lucky, the sun shines and it’s a pleasant drive to Calke Abbey, through a pretty oak-lined passage, past a rare breed of longhorn cattle grazing in the dewy grass. Eventually you hit Ashby de la Zouch, where the remnants of a massive medieval kitchen occupy your imagination for an hour, as does a climb to the old castle lookout. (Hint: rent the audio guide. It’s entertaining and informative.)

You’re hungry again, and your guides insist on dinner, a Sunday afternoon tradition. Your destination: The Rose & Crown in Brailsford, a cheery affair serving hearty classics such as beef roast, Yorkshire pudding and steak-and-mushroom pie. Ask the server a question, any question, (“Where’s the bathroom?” or “What, exactly, is Yorkshire pudding?”) and he’ll quip, “Ah, right, so you’re a foreigner.”

Chase your meal with a pot of tea at The Izaak Walton Hotel, where little girls in frilly attire frolic with their mothers on the lawn, while sheep and cattle graze the steep slopes of Thorpe Cloud in the distance. Drink up, then walk along the water in Dovedale and imagine the Hollywood movies that have used these scenic lands as a backdrop. 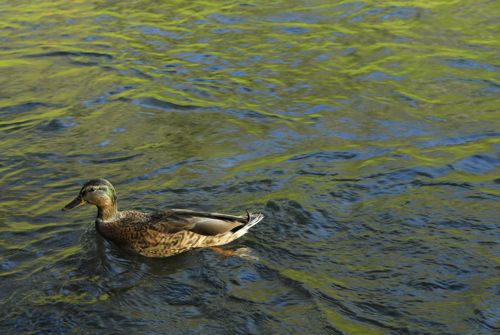 A duck floats along the Dovedale, in Izaak Walton country, named for the author of The Compleat Angler, first published in 1653.

That’s it, your time is up. Head to East Midlands Airport, and make sure your baggage does not exceed 20 kilograms—or you shall pay dearly. 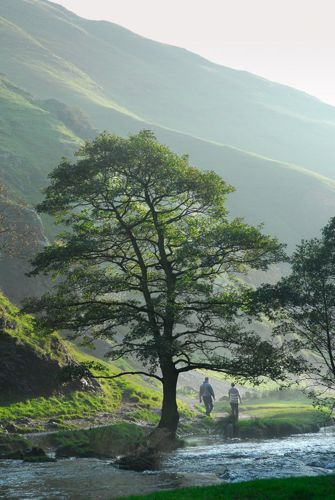 Beautiful views along the Dovedale.

5 replies on “32 Hours in Derbyshire”

Karen,
That stirred some childhood memories of short holidays whilst the John Smiths stirred a few more recent ones!! A lovely post and wonderful photographs, I’ll be at East Midlands airport later this week too, oh and I once bought my brother a 1927 edition of the Compleat Angler…I told you it stirred some memories!

Beautiful photos and an inspiring coverage. Thought of starting your own online magazine?

Miles, I’m happy to rouse the memories. Hope your trip through East Midlands fares better than ours did.

Igor Prawn, I thank you for your confidence. I once dreamed of starting a magazine (and in fact I created a prototype for my master’s project) but the whole idea seems to make my gut churn now. Maybe someday….

Love the mallard photo — the green reflection & the iridescence of the mallard’s head is wonderful.

Thanks, Jess. But credit must go to my husband, the photographer.