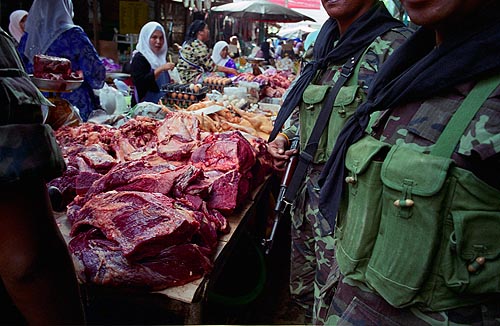 Soldiers patrol a market in Pattani, in southern Thailand, where more than 3,500 people have been killed in an insurgency since 2004.

More than 90 people died and 200 were injured in a car bombing that ruptured a market Wednesday in Peshawar, Pakistan. As the BBC reports, “The market mostly sells products for women, and most of the dead were women and children.” The photos are sickening.

Sickening, as all such violence is, but even more so because of the venue. A market. Women. Children. Wednesday shoppers, dead.

I have not been to Peshawar, nor have I reported in Pakistan. But I have visited markets under threat of attack. I have strolled the aisles for vegetables and herbs while everyone’s nerves go shaky in the presence of men with guns.

The above photo was taken at a local market in Pattani, where thousands have died in violent attacks that bewilder Buddhists and Muslims alike. When Jerry and I visited, locals told us to steer clear of soldiers because they are often the targets of bombings. We were advised to limit our time in crowded places. “Just do your business and go,” a Pattani shop owner told us. That morning in the market, as soldiers patrolled, the aisles cleared as in the parting of the Red Sea.

When I woke to the news from Pakistan today, I wondered how many people have died in market violence around the world. Google “market bombings” and you’ll find a long string of incidents, mostly in Pakistan and Iraq, but also in places such as Uzbekistan, North Ossetia, Indonesia, and, yes, Thailand, too. How many women die each year while buying a leg of lamb? How many kids are sent out for tomatoes, never to return? What price does the world really pay for a sack of groceries?

And who will publish these important food-issue stories?