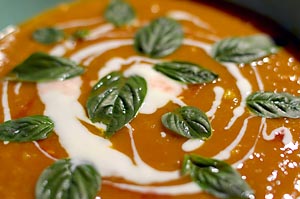 The other day I asked Jerry to fetch me a yellow zucchini, and he brought home a yellow Thai squash.

I know August isn’t a month often associated with a hearty squash soup, but I felt inspired. It’s rainy here, which has the tendency to feel wintery at times. Plus, I had half a squash sitting in the fridge, as well as two tart Asian pears that I wanted removed from my life. So I made soup and we both agreed it would make a savory Thanksgiving supplement. Here’s the recipe:

*I’m sure butter would be fine, but it’s hard to find around here so I use ghee.

Mince the garlic and stir-fry with ghee until golden. Toss into your soup pot. Take the rind off the squash and de-seed. Chop into small pieces and add to the pot. Peel and core the pears, chop into small pieces and add to the pot. Toss in curry powder, cinnamon, cloves, sea salt, water and ghee. Bring to a boil, then simmer until the squash and pears have broken down. (I was amazed at how quickly this happened. This was not a tough squash.) Mix thoroughly, add half the port. Taste and add more of anything needed. Just before taking off the heat, add the remaining port. If you want a smooth soup, puree in a blender. Or serve it slightly lumpy, country-style, as I did. Garnish with yogurt, basil leaves and a drizzle of port.

Your sister makes a good squash soup every Thanksgiving. I’ll have to point out this recipe to her. Of course, you-know-who wouldn’t eat it! 🙂