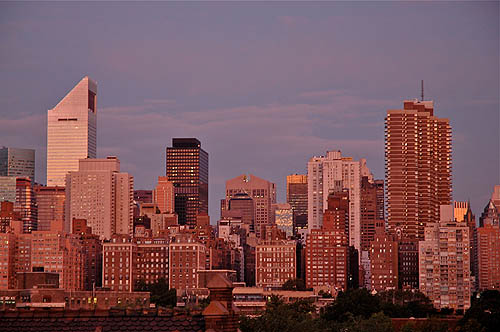 What with the hullabaloo this week, I neglected our return to NYC and Pittsburgh. Hectic days, indeed. Our mornings began early, in an hour of lovely light, as seen from our hotel. 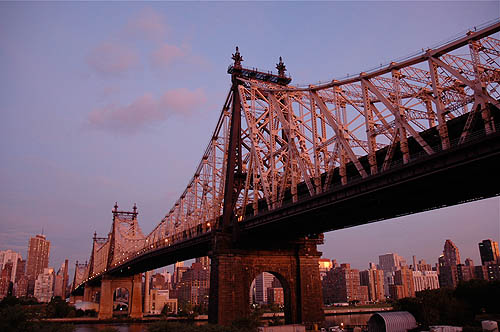 We had a good location, near the Queensboro Bridge, which sandwiched us smack dab in the middle of our many appointments across the area (thanks, Eric, for the recommendation!). 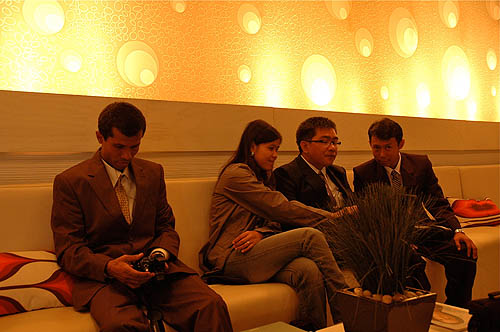 Here, we have the group gearing up for a full day of visits to magazine offices, followed by an afternoon at the UN. 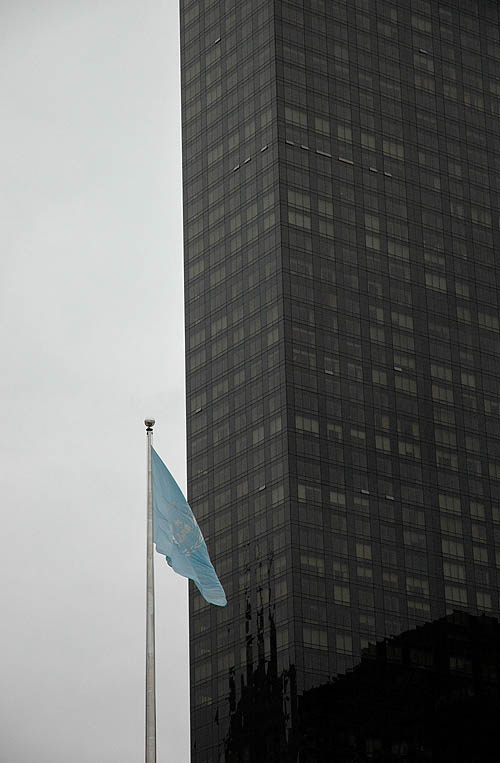 They made history that day, as the first Burmese journalists representing local media to enter the United Nations offices—which entailed lengthy searches and security procedures in order to get through the compound, followed by a whole lot of waiting for sessions open to international print media. 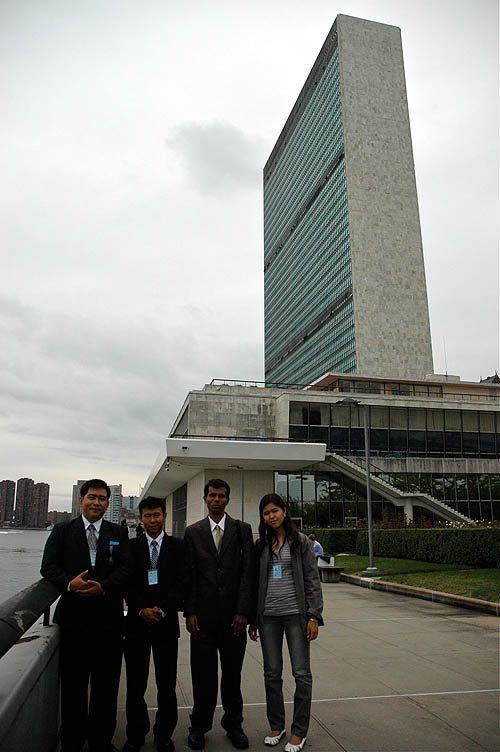 By late afternoon, the group had seats in the press rows of the upper balcony overlooking the UN chambers, where Secretary-General Ban Ki-moon delivered his summary statements on the Climate Change Summit. He showed his humanity that afternoon, going beyond his speech to play a touching video clip of the first time astronauts saw the Earth from the Moon. 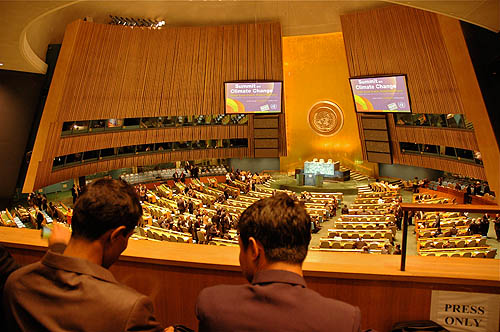 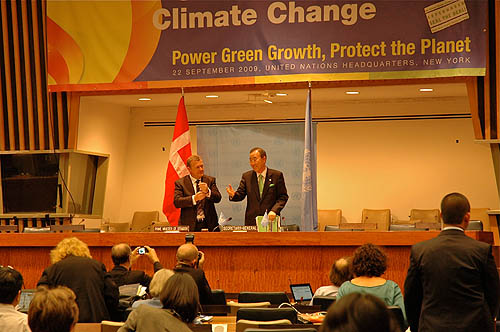 Our alarms buzzed at 3 a.m. the following day, in preparation for a 6 a.m. flight. First stop: Dulles International Airport, 5 hours. Not enough time to see Washington, but ample opportunity to visit Smithsonian’s nearby Udvar-Hazy Air and Space Museum. 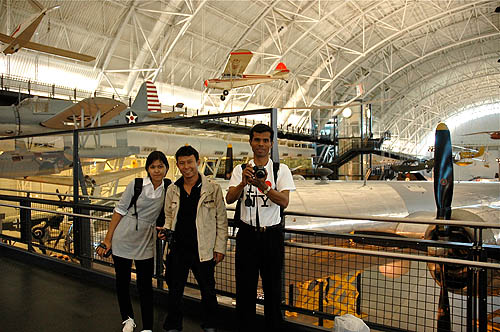 Less than a day after viewing a UN exhibit on the atomic bomb, here the participants stand before the Enola Gay, the B-29 Superfortress that dropped the first bomb on Hiroshima, Aug. 6, 1945. 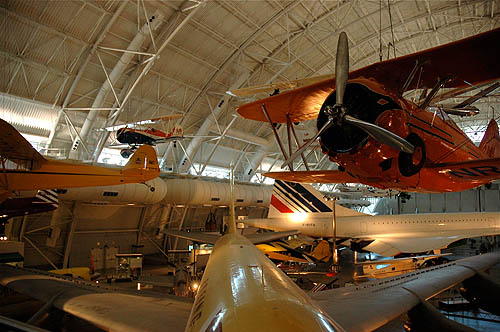 Bonus: no one had expected the chance to see the space shuttle Enterprise on this trip. 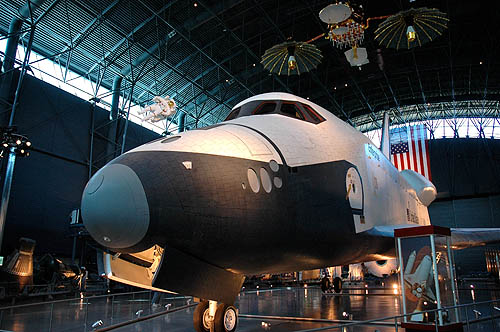 Now, then: welcome to Pittsburgh. 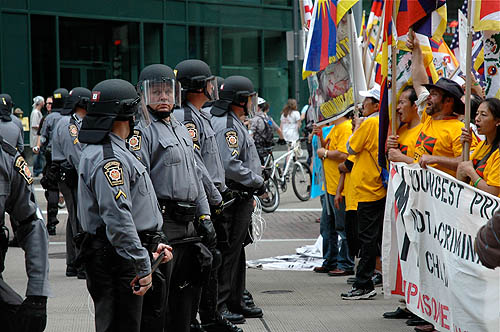 We found ourselves in the middle of a Free Tibet demonstration…. 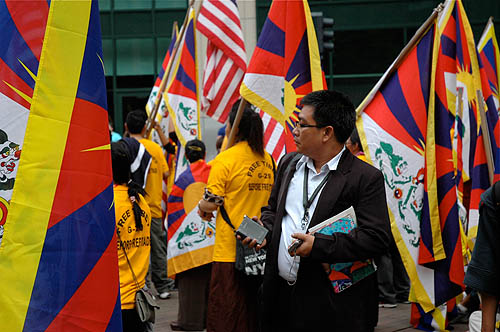 ….which added to the participants’ stories on events outside the David L. Lawrence Convention Center while world leaders met inside. 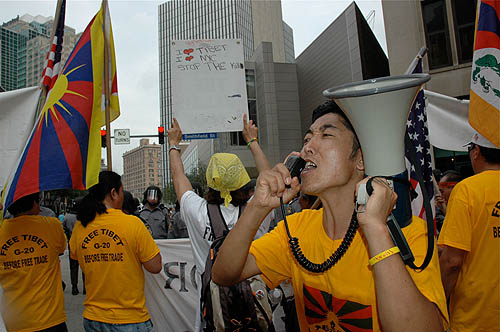 Pittsburgh had its own Mounties that week—and every other conceivable form of cop. 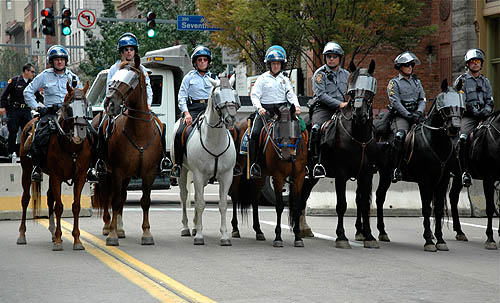 How eerie, to walk alone along a highway on-ramp, not a single moving vehicle in sight. 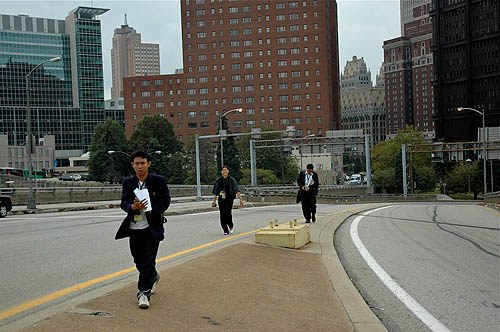 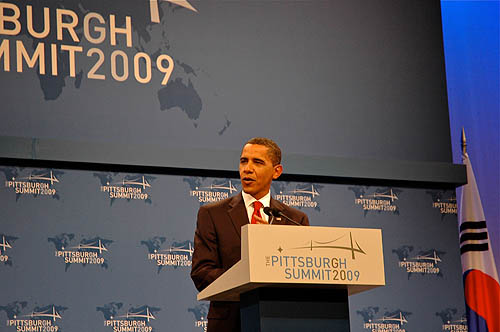 When President Obama gave his closing press conference, our group was there, front row and center. The participants hadn’t expected to get so close. Neither had they expected such a short press conference, with the President calling on just a handful of reporters by name. Such lack of spontaneity! “It is worse than my country,” one participant said. Still, the group walked away—with blistered feet and weary eyes—filled with once-in-a-lifetime experiences.

Now, what does any of this have to do with food? It turns out, quite a lot. While demonstrators took to the streets around Pittsburgh, protesting injustices across the globe and the missing voice of developing nations, G-20 leaders assembled a joint statement addressing the future of a global economy. The 10-page document is heavily peppered with reflection on poor countries, their access to resources and the steps needed to ensure people have food:

22. To take new steps to increase access to food, fuel and finance among the world’s poorest….

23. Over four billion people remain undereducated, ill-equipped with capital and technology, and insufficiently integrated into the global economy. We need to work together…. To start, we call on the World Bank to develop a new trust fund to support the new Food Security Initiative for low-income countries….

REFORMING THE MISSION, MANDATE AND GOVERNANCE OF OUR DEVELOPMENT BANKS

* its focus on food security through enhancements in agricultural productivity and access to technology, and improving access to food….

* its focus on human development and security in the poorest and most challenging environments….

27. …it will be important to protect the voting power of the smallest poor countries.

STRENGTHENING SUPPORT FOR THE MOST VULNERABLE

34. Many emerging and developing economies have made great strides in raising living standards…. This process was interrupted by the crisis and is still far from complete. The poorest countries have little economic cushion to protect vulnerable populations from calamity, particularly as the financial crisis followed close on the heels of a global spike in food prices…. The UN’s new Global Impact Vulnerability Alert System will help our efforts to monitor the impact of the crisis on the most vulnerable. We share a collective responsibility to mitigate the social impact of the crisis and to assure that all parts of the globe participate in the recovery.

38. Even before the crisis, too many still suffered from hunger and poverty and even more people lack of access to energy and finance. Recognizing that the crisis has exacerbated this situation, we pledge cooperation to improve access to food, fuel and finance for the poor.

41. We commit to improving access to financial services for the poor….

* We have a responsibility to invest in people by providing education, job training, decent work conditions, health care and social safety net support, and to fight poverty, discrimination, and all forms of social exclusion.

* We have a responsibility to recognize that all economies, rich and poor, are partners in building a sustainable and balanced global economy….

Now, what in heck does all this mean? Well, if you read the whole document, you’ll see it means the UN and other international organizations did not heed my advice a few years ago when I gave a talk in Borneo about using clear, concise language to convey global messages. But it also means the G-20 leaders have a responsibility to fight global poverty and ensure everyone has enough to eat. They have promised to do so.

How? When? Using which means? Affecting which people? In what ways? Who knows. These questions remain before the G-20 convenes again in Canada next June.

Wow! Some trip!
Did President Obama recognize your Burmese friends and take their questions?

No, he didn’t take their questions, but the group got a State Dept. press contact for future reference.

[…] year, I had the great fortune to attend a UN summit with a few of my Burmese colleagues (and I’m delighted to say another batch of Burmese […]