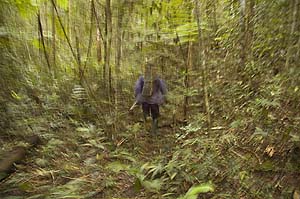 Tony, racing through the jungle

“Do you want to see hunting?” Sylvester asks.

We gather around a vast kitchen table, sipping whiskey in fluorescent light as a generator rumbles outside. We plan the next day’s trek through the Kelabit highlands of Borneo, where Sylvester and his reticent friend Tony will guide us.

“No, no that’s OK.” We just want to see the jungle, far from the well-trod path.

The next morning, Tony shows up with a rifle and seven dogs.

And off we go, first rising through a plain of ferns and pitcher plants, then descending into jungle where the bushwhacking starts. Six inches of sucking mud amid creeping ferns, pointy branches, stabbing prongs, slashing vines, thirsting leeches. I pause, at times, to snatch a few moments among the giants around me. I observe the thicket of forest that swaddles me, and I have no, absolutely no, idea where I am or where we came from. These guides are indispensable to me; I at their mercy.

And yet Tony leads without ado, slashing at unwanted intruders in our path, making his way as though he knew by heart every mud patch, every tree, every bloodsucker in this jungle. How does a human being gain such keen awareness of his environment? (How does a population lose it?)

Tony’s dogs are kind and gentle beings. They follow us, then sprint ahead to lead, then back again to monitor our progress, sniffing us, making sure each of us finds the right way. They, as we, suffer the forest wrath with leeches between their toes and buzzing insects on their backs. The trail smells of wet dog and sweaty dog, and no doubt us.

We reach a bridge, a rickety log that breaks beneath a dog. He topples into the water, emerging sodden but voiceless, and continues up the trail apace.

There is a squealing ahead and suddenly Tony is gone, sprinting through the jungle. The dogs have cornered a wild boar and a few minutes later we find Tony on the hillside, hands upon a panting pig, bloody from a dog’s nip. The boar struggles and stands to fight, but the animal is no match for Tony and his helpers. 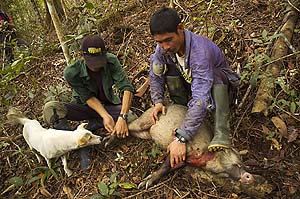 “You are very lucky,” Sylvester tells us. We have caught a pig, and we shall take it back alive.

“Yes, because we don’t have the time.” The entire day has passed. Darkness draws near; no room to butcher here.

The pig blinks its eyes and breathes heavily on the ground as the two men tie its legs and stuff it into the expandable rattan backpack on Tony’s shoulders. I look at the pig, it looks at me, and I grow misty-eyed. But why? It’s a pig. I eat meat. This is how it works.

When it’s cinched inside the basket, Tony wraps the nose and face tightly. The pig closes its eyes and Tony hoists the load upon his back. 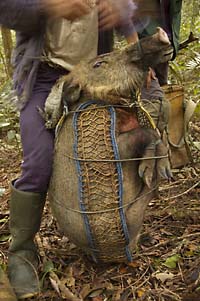 “Not heavy,” Tony says. Tony is a man of few words but sturdy muscles.

We follow this man and boar back to the village, stopping a few minutes on the high banks of a small stream. Tony and Sylvester build another bridge, with planks and a railing. We continue on through creeping nightfall and ever more mud. 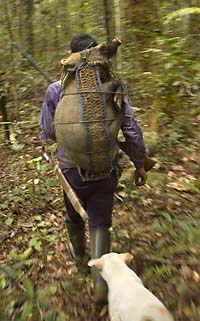 In darkness, we return. As I shower–cold water from a bucket–I smell burning hair, a familiar Asian scent, and I know the pig is no longer alive. When I have dressed, I enter the house of Walter, Tony’s brother. Walter sits on a four-inch stool beside the fire with a pig leg and a quarter of its side. Piece by piece, he puts it into the fire to singe the hair and skin. Then he takes a cleaver to the hot flesh, shaving bristly hair onto cardboard spread across the floor. While he works, he talks of guiding, how to be a good guide; He says you must acquaint the tourists with the jungle, show them how to survive and what to eat and drink.

The pig is bloody, its inner workings visible. It all hangs out on Walter’s floor. There’s no separation here between animal and dinner on the plate. When Walter is through with the cleansing, he puts the leg in the sink and douses it.

“Fry it.” At times, Walter has no more words than Tony.

“Yeah. And then we can take the bones for soup.” He asks if I want to eat the meat fried with black soya. It’s how they usually do it. Or else with curry. But tonight he has no curry.

Soya is just fine, I tell Walter. I get up close and look at the glistening red meat, just moments ago a pig in a basket. Walter sets it on a cutting board and slices the skin. He sections the meat, and blood runs everywhere. I can see the tautness of muscle in its leg.

I felt sorry for that pig, but my feelings were inconsistent. I’ve eaten pork all my life. We had a pig roast at our wedding. And this pig led a completely natural existence in the jungle until its last three terrifying hours of life. How does that compare to America with factory-farmed pigs, raised in snug little cubicles, no room to roam, fattened to blue-ribbon proportions? I remember visiting the state fair as a child, looking at all those pigs displayed, awaiting judgment, just to be sold and butchered. Pigs weighing half a ton. I never felt much in the way of remorse–they were pigs after all, and I was a girl growing up in Wisconsin. But I think about them now; their cages no more inhumane than the basket in which our dinner was brought to its death.

Later that night, we head to Tony’s yard, behind Walter’s house. Several village men and hunting dogs have gathered around the fire, as ribs and backfat sizzle on the grill. Tony plays a cassette tape on his little boombox. It’s a mix of old hits: “Knights in White Satin,” “More Than Words,” “Eye of the Tiger.” He bought the tape in Miri, a town four hours by foot and one hour by plane from this barbecue in the jungle.

We listen to the music, and we all eat pig. 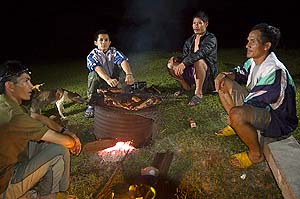