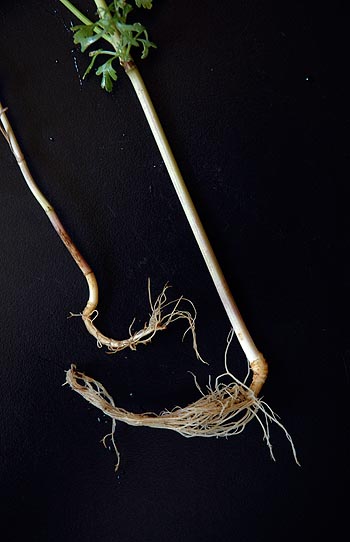 I didn’t tell you the whole story when I posted the latest Rosi Recipes. That evening, we also ate another David Thompson-inspired recipe for Thai grilled chicken with a marinade heavy on coriander (cilantro) root. This is a critical ingredient of many Thai recipes; how frustrating to find only the leaves in markets around here! Where do all the roots go? It’s like missing socks. Somebody, somewhere, is hoarding a huge stash of roots and socks.

Anyway, I’ve been known to buy potted cilantro plants when I need the roots. I do the same with dill when mine isn’t faring well in the garden; the price of a small bunch of dill in the market often exceeds the price of a whole plant. On this particular night, I had five ailing cilantro plants (they didn’t like the giant toad who had taken up residence in their territory), so I decided to harvest the roots and pound them into a chicken marinade. Here’s what happened:

Method:
Rub marinade under and over chicken skin. Refrigerate a couple of hours, then grill to desired taste.

Late last year, while accompanying Andy Ricker and Suntorn â€œSunnyâ€ Chailert on their northern Thailand tour, I learned of another superb Thai marinade that relies on coriander root, this one for pork. It’s an early sort of nam prik, which predates the chile in Thailand and uses instead white peppercorns for its zip. Simple:

Method:
Pound together all ingredients and smother the ribs. Let sit overnight (or at least several hours). Make the garlic oil by pounding a handful of small garlic cloves, peels and all. Fry until golden (but not burnt or bitter). Reserve the oil for frying; use the garlic for the ribs or anything else you desire.

After the ribs are infused with the marinade, heat several inches of the garlic oil in a large wok. Add the ribs and fry until crispy and dark. Top with garlic if desired.

“Sunny is known in his village for making this one the best,” Andy said while we cooked the ribs. “It’s gonna be a good breakfast.” He was right. Fried Thai pork ribs does a great morning make!

I love to use coriander roots in cooking – it has got so much flavours than the leaves!

That sounds good! We’re able to get coriander root (and the leaves as a bonus!) from our local farmers market. I never was sure about the cleaning part- all I ever do is a little scrubbing under water. I never bothered to look for recipes, instead just added it to a variety of dishes that actually overpowered it. I think pounding it is the key! I will try that next time.

Karen, have you ever run across dishes with bitter melon greens? I really like them simply sauteed, but in order for my guinea pigs (guests) to embrace them, I need to find a counterweight for them (besides pork).

And then there’s fresh turmeric root…