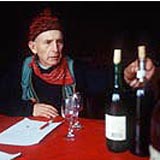 We lost a fine friend and a pioneering man this week: Richard Sommer, founder of the Oregon vinifera industry. In honor of him, I am posting a profile I wrote many years ago about this remarkable scientist and winemaker. I apologize for the tiny pix on short notice. Richard, we shall drink to you tonight. We miss you.

Sit down with Richard Sommer in his wooden loft of rich bouquets. Gaze across his labyrinth of hearty vines. Sip some wine, nibble on sourdough, and heâ€™ll tell you.

And heâ€™ll tell you about the wine, for it is what he knows best, the thing heâ€™s done for 40 years, the detail that has etched him into Oregon history.

“I like wine. Wine is fine.â€ His staccato speech is a style and pace all his own. Richard Sommer talks and lives and works his own way.

â€œThe old winemaker,â€ as he calls himself, came north from California in the late 1950s and pioneered Oregonâ€™s vinifera industry. Wine grapes first entered Oregon a century before Sommer, along the Oregon Trail. Berry wines have long flourished in the state. But Sommerâ€”some call him a visionaryâ€”saw great prospects for European-style grapes in Oregonâ€™s rich soil. â€œWell, thereâ€™s other people who kind of started concurrently,â€ he concurs. But HillCrest Vineyard, just outside Roseburg, is the stateâ€™s oldest continuously running vinifera winery. And Richard Sommer fetches a bit of fameâ€”in local realms, anyway.

But the 71-year-old vintner doesnâ€™t much care for celebrity. Heâ€™d rather sample an early release and talk about the weatherâ€”scientifically. Heâ€™ll sip and sniffle, dribble some down his chin, spit in a canister, sip some more. Maybe a neighbor will drop by, or a couple from Wisconsin. Heâ€™ll crack a few jokes, like the one about a priest who returns as a studâ€”on a tire. Maybe Sommer will sell a few bottles that afternoon.

And at dayâ€™s end, the old winemaker retires to his next-door home, alone, as he has for decades.

Sommer never had a family. â€œNo kids. I donâ€™t know, I never got married. Too busy growing grapes,â€ he says. â€œIâ€™m the grape grandfather of Oregon wine. Got a lot of little bastards out there.â€

He hires a few seasonal workers to pick and press and prune. At times, heâ€™s had help in the tasting room. But mostly, HillCrest Vineyard is a solo endeavor. 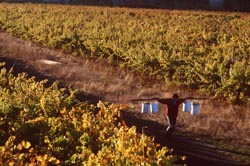 It sits in the Umpqua Valley, on an old turkey farm with rich soil. â€œI decided in 1956 to grow grapes,â€ he says. Searching for suitable climes, he found Douglas County. â€œRoseburg came out the best. There was an opportunity in Oregon and no one had taken advantage of it yet, except my great granddaddy, and he wasnâ€™t really a wine person. He was a pioneer.â€

It runs in the family. Sommer started with 4 acres of five varieties planted in 1961 on a handsome plot in the shadows of Callahan Ridge. Today, Oregon boasts more than 100 wineries, and HillCrest has 50 acres of eight grape types.

Susan Sokol Blosser, who has written about Oregon wine history and presides over a winery bearing her name, says the time was ripe. â€œThere was an interest in wine all around the world at that time. Richard was on the cutting edge of that.â€

His favorite and specialty is Rieslingâ€”light, dry and distinctly reminiscent of his aromatic domain. As many vintners are swapping the cabernet, sauvignon and riesling of yesterday for todayâ€™s popular pinot noir, Sommer still dabbles in all of them. And, while todayâ€™s wine visionaries see big business and profits, most of Sommerâ€™s wines sell for less than $10 a bottle. â€œHeâ€™s a very humble guy, and heâ€™s not out tootinâ€™ his own horn,â€ says Sokol Blosser, â€œbut everyone recognizes him as the pioneer.â€

Sommer grows and sells of his own accord. Production fluctuates. â€œIâ€™m getting behind,â€ he chuckles. â€œI dropped the ball about 10 years ago.â€ He made 24,000 gallons in the late â€˜80s. In recent years, he has sold many of his grapes to other vintners. But thereâ€™s always a spark in the pioneerâ€™s eyes, and the generously late rains last year made for a spectacular harvest that thrilled Northwest vintners, including Sommer. â€œGotta make more wine. Gotta make more wine,â€ he says. â€œYeah, gotta augment the social security a little bit…. Now Iâ€™m back with it again.â€ 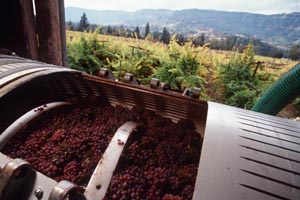 â€œI donâ€™t know how he does it. All of this by himself,â€ says Robin Crooks, who worked for Sommer part-time until exploding gas prices hampered her 60-mile round-trip.

She stumbled upon Sommer during a wine tour. â€œUh, you want a job?â€ he asked her.

â€œThis is the best job I ever flumped into. Heâ€™s just so smart. Donâ€™t you love being around smart people?â€ she chats while hanging Christmas decorations in the tasting room last year. â€œI think he gets kind of lonesome. We sort of cheer each other up… I think he was kind of in a funk when I first got here and I was sort of in a funk. So weâ€™ve sort of helped each other. Weâ€™ve been good for each other.â€

Sommer has bred industry camaraderie. â€œI think a lot of different wineries in the valley have used his equipment over the yearsâ€”you know, shared his equipment,â€ says Donna Souza-Postles of La Garza Cellars, while picking Sommerâ€™s Fall 1999 grapes for her own use. â€œHe helped us out a lot over the years…. It does make you kind of be like a family,â€ she says.

And, like family, she looks over Sommer. She notes the tremendous responsibility a vineyard demands. â€œI wish that he could keep everything together, but itâ€™s just too big for him…. He needs to do what he needs to do to make him happy.â€

Sommer saunters through the year. Through picking, pressing, bottling, tasting, pruning and growing, he lives the cycle of winemaking. He is the HillCrest backdrop.

It is fall 1999. Dressed in waders, suspenders and knee-high rubbers, Sommer whisks the romance from the image of wining. Itâ€™s dirty, rotten, cold and smelly work as he stuffs a shovel in pinot noir grapes clogging a towering stainless steel fermenter. â€œLook at that color in there. Beautiful. Boy thatâ€™s permanent.â€ He climbs a ladder, peeks inside. â€œOh yeah, I can see the bottom now…. Now we got a hole in there. Now we can work it loose.â€

When heâ€™s had enough of dank places, he heads back outside to the world he loves most. Four migrant workers pick while Sommer measures sugar contents with a refractometer heâ€™s had 30 years. â€œAll right, 24, not bad. We got small clusters and good grapes.â€ Brilliant juice drips through his hand and onto the little red tube. â€œTwenty-six. All right. The harder you squeeze, the better it is… Sweeter the better, I like, as far as this part of the country. Twenty-seven. All right. Twenty-seven. Usually we donâ€™t get that high of sugar.â€ He grabs another cluster. â€œTwenty-seven and a half, 28, 28.â€ Itâ€™s a sugar-rich harvest.

As the day fades, Sommer drives his tractor back to the winery, toting two crates full of buckets, bumpety bump, over rough earth and weeds and asphalt, rear tires squeaking. He sends the workers home with complimentary bottles: Itâ€™s someoneâ€™s birthday. Then he hauls grapes into the winery by himself. He tallies 62 bucketsâ€”not a good day of picking, he says. He gets his notebook, does his math.

It grows dark, and he is alone.

But heâ€™s back at the harvest toil, every day. From the balcony, about a week later, the wrrrow wrrrow of presses competes with crickets and a barking dog. The machines slowly rumble clockwise, steadily crushing grapes, showering juice into the trays. An Oregon stillness grows as clouds set in. â€œYep, fall is here. Yep, yep, I think Indian summer is over,â€ he says as cold wind funnels through the press area.

He searches for empty barrels. â€œThatâ€™s the trouble. I donâ€™t pour anything out,â€ he says. He dumps an oxidized gewurztraminer onto the ground, making room for new juice. He dangles his legs and three hoses from a wooden ledge supporting old barrels. He suctions, slurps, offers a gulp out of another cask, and talks. High end wineries replace their barrels frequently. â€œFor my purposes, I keep them forever,â€ he says.

â€œIâ€™m not really a boutique winery.â€ 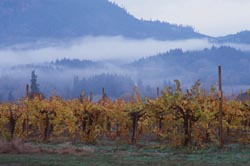 Sommer nearly misses Thanksgiving with relatives in Ashland after a late-night bottling session. â€œTil 9, 10 oâ€™clock, all by myself.â€

â€œYou can just drink that all day.â€

Clouds hang low in the valley, teasing with Callahan Ridge. Light fades, vanishing slowly. Guests small-talk about all-season, never-ending beauty. A new layer of slick mold wraps the balcony outside. Moss dangles from the railing. The fields are brown; spindly and snaky branches mingle where golden leaves once fluttered.

Sommer muses about far-away places. About setting up a tent on an Alaskan ferry. â€œYeah, I gotta do that sometime,â€ his eyes twinkle.

Again, months later, green returns to field, blue to sky and red to cheeks. Long days rouse the old winemakerâ€”to relaxation. â€œI was sleeping on the grass,â€ he says one afternoon. â€œKind of cool in the shade. Gotta get in the sun.â€

He offers updates: Robin Crooks no longer works here. Neither does Jose Encino, longtime field hand. â€œHe took off for Arizona I think.â€ Heâ€™s hired a few new field workers. Heâ€™s been spraying the grapes with sulphur, noting his work in a little log book. â€œYeah, I sprayed them this morning and then I broke down. Gotta fix the tractor.â€

Then he jumps to catch a bumblebee in his handkerchief, safely ushering the little bugger out the door.

4 replies on “In Memory of Richard Sommer”

The wonderful aroma of grapes in his tasting room, the light bubbles in his Semillon. Hats off to Richard Sommer.

I’ll be pouring one out for Sir Richard, as well. He is the kind of soul that makes me proud to be from Oregon. Cheers!

RIP, Richard. Thanks for the heads up. I hadn’t heard about his passing..