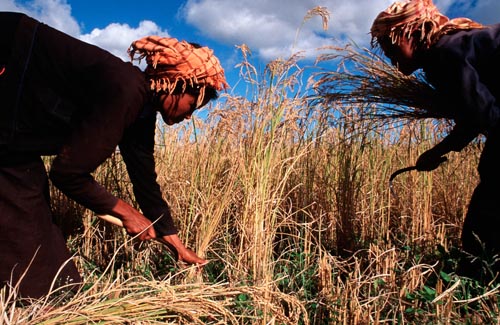 The beans we ate with burgers on the 4th of July? Slow-cooked ginger beans. Pintos and Anasazis are what I used, though most any reddish/brownish sort of bean will do. Take your pick, your options are many. The recipe came from Shan State. We’d eaten them years ago, in a beautiful but modest wooden home in a village far from any paved roads. Our hosts shared their recipe and this is precisely what they said: “Cook the beans. If they’re still a bit hard, pound them in the pot. Add onion, tomato, ginger, peanut oil, salt. Don’t pour off the water!”

Terribly simple. Of course they gave no measurements, no one uses recipes there. People cook by memory and by heart.

I’ve made these beans many times since, and we’ve loved them every time. Something about the faint taste of peanut with ginger in the mix. But it had been several years since our last batch, and I figured they’d pair nicely with our 4th of July curry burgers. This is what I did:

I washed the beans then soaked them overnight, about 3 cups of pintos and the 1/2 cup of Anasazis I had remaining in a jar. By morning the beans had soaked up most of that water, so I covered again and cooked until tender. I added a potato cut in half; years ago, my Spanish teacher had told me to cook beans with a potato in order to reduce gas. (Toss the potato when done!) I honestly don’t know how much truth this holds, but it seems to help, and with the whole famdamily scheduled to arrive for dinner I figured I’d use any weapon I had.

When the beans were cooked, I mashed them ever so slightly and added sliced yellow onion, three sliced tomatoes, a large chunk of ginger cut into small pieces, a pinch of sea salt. I also added several cloves of smashed garlic and a healthy pinch of hot Burmese chile flakes (you know me), then a glug of peanut oil. I cooked longer, until all the flavors had mingled, then drizzled a bit more peanut oil on top. The oil is key.

And that’s it. This made a huge batch, enough to feed six for dinner and numerous lunches beyond. Play with the ingredients until you achieve a nice balance of earthy bean, pungent ginger, a little salt and a background note of peanut.

2 replies on “Those Beans I Mentioned….”

[…] ago Karen encountered this simple braised bean dish mildly perfumed with peanut oil and ginger, which she wrote about on her blog, The Rambling Spoon. After our conversation, I made a note to try it […]