I’m getting behind in my Rosi posts, and this one is out of order. But I wanted to write this now, to give you right now a glimpse of Laura Kelley’s fabulous new cookbook, The Silk Road Gourmet (available soon through Amazon and Barnes & Noble; have a look at Laura’s website for further details). I’ve known this was coming for quite some time; I’m a regular reader of The Silk Road Gourmet blog. So perhaps I should have been better prepared for the 402-page pdf that appeared in my inbox when Laura asked me to review the book. Massive! And what a delight. Volume One (there will be three in all) covers an extensive journey through Western and Southern Asia: Georgia, Armenia, Azerbaijan, Iran, Afghanistan, Pakistan, Bangladesh, India and Sri Lanka. This is what thrills me most: when I page through this book, I find flavor combinations and recipes from numerous regions with which I’m completely unfamiliar…. and yet these foods make perfect sense to me. These recipes reflect a long history of mingling.

More than cookbook, this is an ethnography of food. “The great Silk Road, which arose from the Afghan-Chinese trade in lapis lazuli and jade over four thousand years ago, eventually became a land and sea route that stretched thousands of miles and linked China with such far-away places as Roman Europe, North Africa, and the Levant states of the Middle East,” she writes. “As a result, Chinese foods and preparation methods such as stir frying spread west with the silks, gems, and spices, and flavors enjoyed in the west such as sesame, tamarind, and cardamom came east and were eagerly adopted by the Chinese people.”

Beyond the love of Asian food, Laura and I have something else in common: we both studied anthropology. She writes about the links between the study of cultures and the study of foods. “All around the world, people love their food and express their nationalism or ethnicity through the preparation of specific dishes that they identify as belonging to them.” So very true. No matter where I travel, it is almost always the food through which people so ardently characterize themselves. Food feeds body and soul. It makes people proud. And it also tells us much about history and politics and events that people sometimes want to forget. “Food can help us reconstruct political histories of who ruled over whom and relationships of diplomacy and trade between people,” Laura writes. “Similarities between foods eaten can even reveal the belief in a common creed or system of worship and show how that belief spread over time.” For thousands of years, humanity has mixed its myriad palates. “No nation’s cuisine—not even that of the great, monolithic China—has remained untouched by others over the millennia.”

Intrigued, I am. My hands-on assessment of The Silk Road Gourmet began earlier this month when I had a large bunch of beet greens on hand and I came across Laura’s recipe for greens with nutmeg—superb. Next, I decided to make a Rosi Dinner of dishes from Afghanistan: chicken kebab with cinnamon and black pepper, spicy eggplant with mint and Afghan cilantro sauce. As Laura notes, the kebabs would go beautifully with a pilaf; unfortunately, I ran short on time and ended up serving plain rice. Next time I’d like to try the carrot and raisin pilaf. I chose the spicy eggplant for its unusual combination of mint, tomato, vinegar and chile. And the cilantro sauce? We all went nuts over it. Big winner, indeed. Recipes below, my notes in italics as usual: 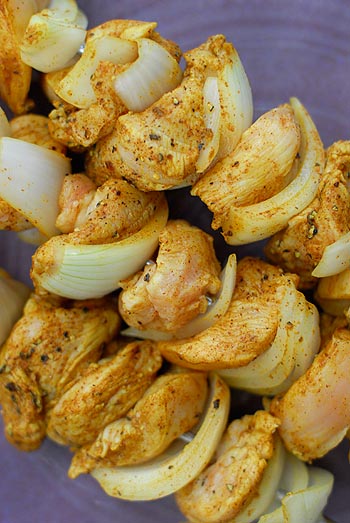 Method:
1. Mix 1 onion and half of the pepper, cinnamon, turmeric, and salt together in a sealable, 1-gallon plastic bag. Add the vinegar and chicken and mix well. Marinate for several hours at room temperature or in the refrigerator overnight, turning several times. (I marinated overnight, which really allowed the flavors to permeate the chicken.)

2. When ready to cook, remove the chicken and string 5 or 6 cubes of chicken on each metal skewer. String the tomatoes and chunks of onions on their own skewers. Sprinkle the other half of the spices over the kebabs and grill or cook in a broiler oven for 5-8 minutes per side (we grilled). Serve hot with Afghan Cilantro Sauce and Afghan bead (We ate rice instead. These kebabs were tasty and the chicken very tender after a night in the marinade.) 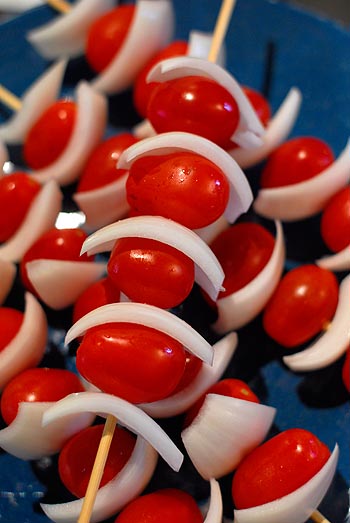 Spicy Eggplant with Mint
From The Silk Road Gourmet

Method:
1. Slice the eggplant crosswise into 1/2-inch slices. Place onto sprayed or oiled baking sheet and bake in 375-degree oven for 15-20 minutes or until nearly, but not quite, done. Remove from oven and let them cool.

2. Pour the tomato sauce into a saute pan and heat. Add drained yogurt (chaka) and white vinegar as the sauce heats. When hot, add salt, pepper, chile, cinnamon, and mint (this threw me for a little loop, as the ingredient list didn’t mention cinnamon but it did call for coriander. I added coriander and a pinch of cinnamon). Cook 2-3 minutes, add beef broth and the undrained yogurt, and simmer over low heat for 15 minutes to give the flavors a chance to blend.

3. Cut the cooled eggplant into bite-sized pieces and add it to the tomato sauce; mix well, lifting more than stirring to allow the eggplant to keep its form. Saute for 2-3 minutes until eggplant is warmed. Cover and cook another 5 minutes until eggplant is done. It’s best to serve as soon as possible after cooking. The squash will absorb a great deal of the sauce. (This turned out very spicy, with a wild blend of flavors, which I enjoyed. I might use elongated Japanese-style eggplants next time, as I find them easier in cooking.)

Method:
1. In a blender, combine the cilantro and vinegar or lemon juice. When the cilantro and vinegar or lemon juice has become a smooth paste, add walnuts, cumin, chile peppers, and garlic and blend again until the walnuts are integrated. (If necessary, add a bit more water to blend the walnuts.) Then add pepper and salt and blend well so that spices are well distributed throughout the puree.

2. Pour the puree from the blender into a saucepan and heat. Cook over low to medium heat for 3-5 minutes. Serve hot or at room temperature. (This one is going to be a staple in our kitchen! Also works well as a dip with chips. Yum.) 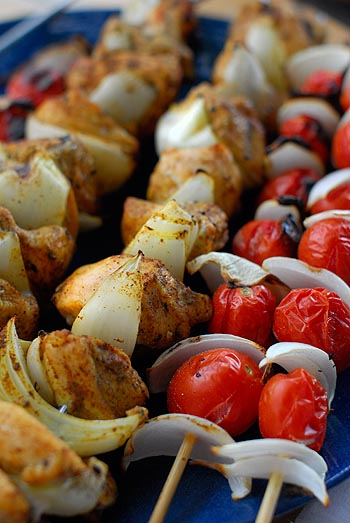 *NOTE: No picture of Rosi this time. She was NOT in the mood to sit for a portrait.

10 replies on “The Rosi Recipes #3: A Silk Road Gourmet Meal”

Yum, yum, yum! Looking forward to acquiring the cookbook and trying those recipes. The ones you show here are very Sephardic.
Rosi’s Oma

[…] To read the rest of Karen’s review and to see her lovely photos, please click here […]

Many thanks for the review!

I’m glad you liked the dishes you cooked and will continue to read and cook as mood and interest suit you!

P.S. The typos you encountered in the eggplant recipe have all been corrected in the final edition (I hope).

JRR, I think this book would go well in your California kitchen!

Laura, I’ll be cooking a lot more from Silk Road Gourmet, definitely. Thanks for the creative inspiration.

I’m looking for some great recipes from Azerbaijan for this week’s Global Table. Are any of these recipes from there? I do have some options from “Please to the Table,” but thought it would be fun to try something from this cookbook. I probably don’t have time to order it before needing it.. and my local B&N doesn’t have it.

Thanks Karen, I’ll definitely contact her! What a great resource. 🙂

[…] and histories. This cultural medley full of color and flavor can be enjoyed easily with these chicken kebabs with cinnamon and black pepper inspired from the Silk […]