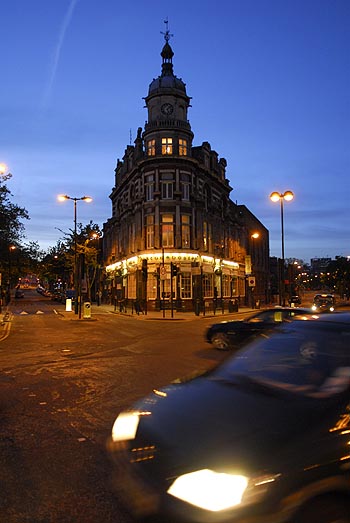 I love the light in London this time of year. What a switch from Southeast Asia, where the sun follows a rather set clock, year-round, with few leisurely sunsets. In torrid climes, the ball falls below the horizon and suddenly it’s night. But at 51 degrees north, in May and June, you get long, drawn-out evening light. 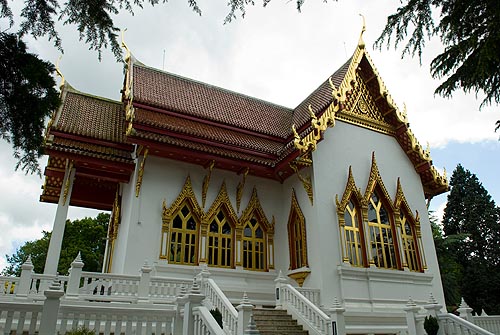 So, then: one fine weekend day, we piled into the Tooting mobile and began our grand tour. Not the usual or expected tourist sites. First stop: Wimbledon Parkside for a look at the Buddhapadipa Temple, the UK’s first Buddhist temple, established in 1965. A treat! Not every day do we see a Thai temple amid such northern vegetation and temperate air. The murals inside differed from the usual as well. Airplanes and missiles? How about the two-headed demon featuring Muammar Qaddafi and Ronald Reagan? Interesting, indeed. 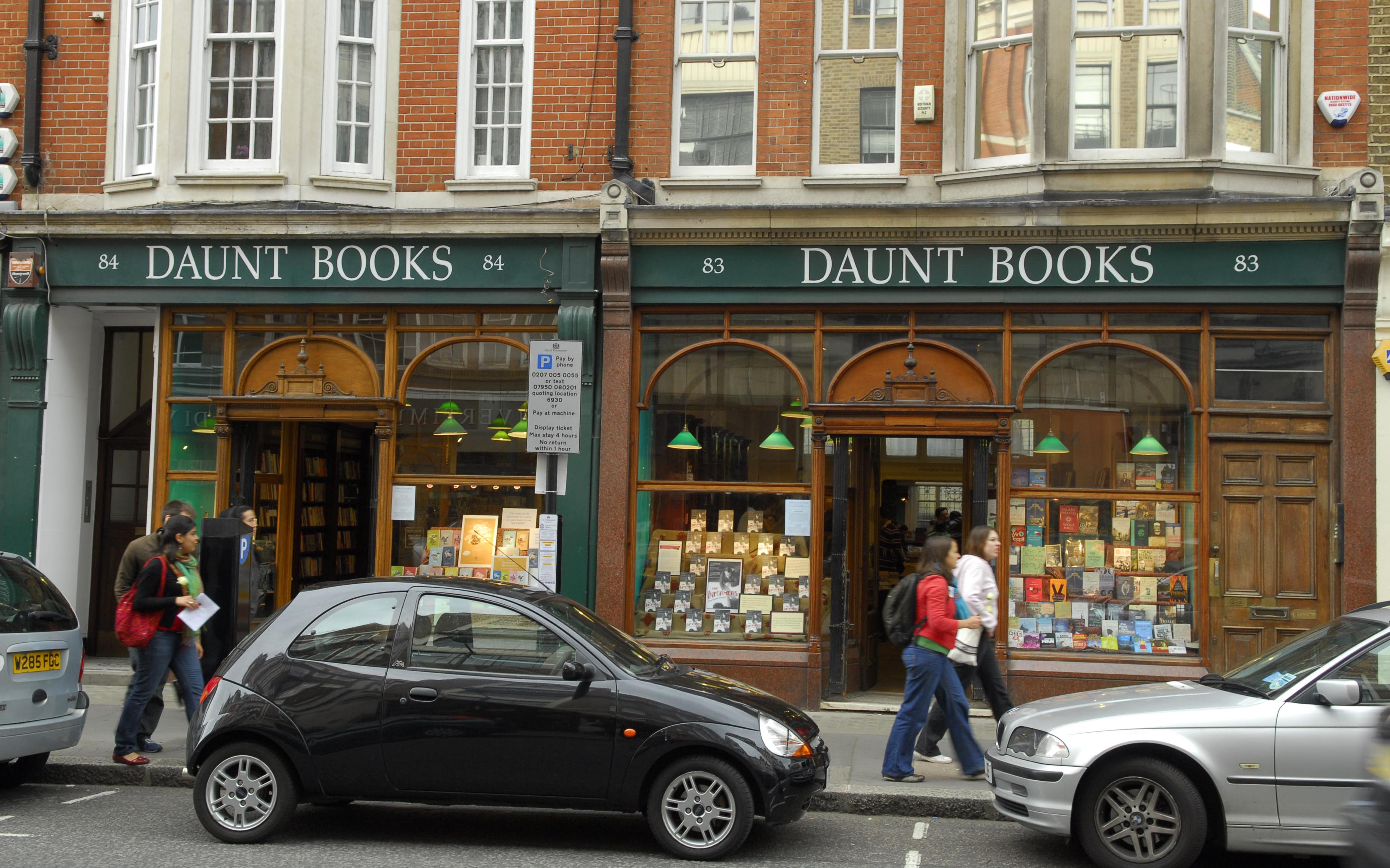 All of us book fiends, we visited an Edwardian favorite, where I picked up a copy of this and this. We looked for this too, but the store had sold out (our dear guides later gifted us with a copy). Jerry bought me a bizarre little item, which I finished at 5 a.m. one sleepless night. It contains several worthwhile musings on food: “Don’t despise the domestic potato.” And my favorite: “Don’t forget to feed the ‘brute’ well. Much depends on the state of his digestion.”

We also stopped at Rococo Chocolates, where packaging is an art as much as the goodies inside. We picked up a four-pack of truffles filled with Islay whisky, which we’d come to love during our Edinburgh trip last fall.

Oh, and if you’re looking for obscure Burmese ingredientsâ€”roselle leaves, for exampleâ€”stop by Mum’s House, a teensy-tiny shop behind half a dozen others on High Road, across from Burger King. 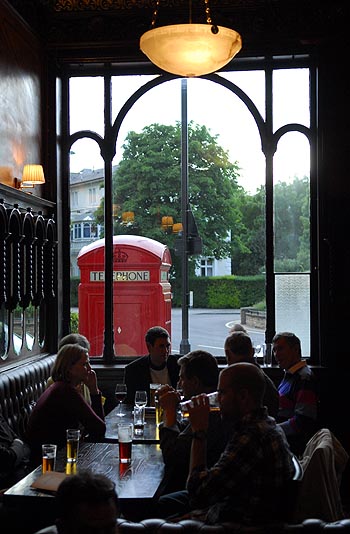 Much of our London touring centered around pubsâ€”some for libations, but several for the gastro aspect. (The male half of our guide duo had research to do. Really.) 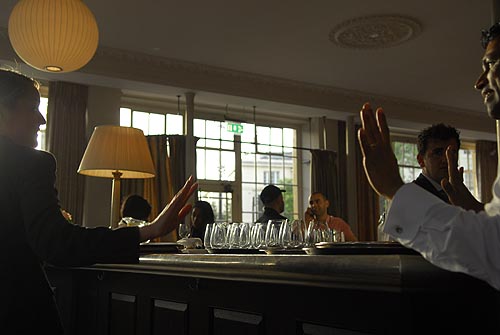 Just as that evening light hit its most pleasant notes, we stepped into the York & Albany, where I tasted a fine bottle of Aspall Suffolk Cyder. 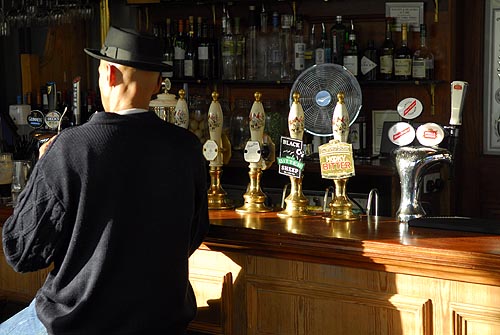 Can you tell I have a thing for light? We found ever more of it at the Bull & Last, one of London’s most notable gastropubs… 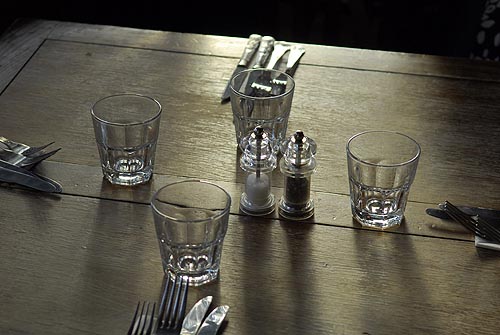 …which makes its own charcuterie.

Now, how about that for a city tour? Thank you, dear Tooting friends. I leave you with the words of diarist Samuel Pepys, who wrote in thanks to Astronomer Royal John Flamsteed after a visit in 1697: 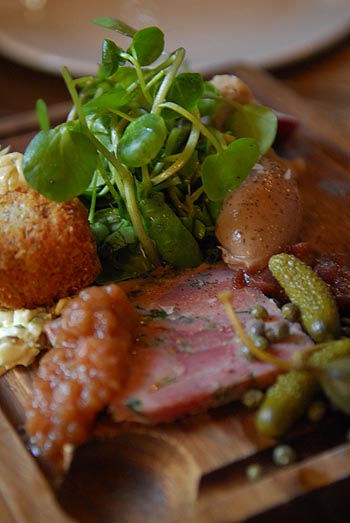 “…a most thankful acknowledgment of Your Crowd of Favours, both intellectual and Culinary, at my late visit; and both of them heightened by the conversacion and kindness of your Excellent Lady.”

8 replies on “Travels with the Tooting Guides”

Thank you so much for the information on Mum’s House – I must make a point of going there one day. Their ready made foods look so delicious!

Karen,
You know my capital better than I do! It’s not often we northern types venture ‘down south’ but that doesn’t mean that we are stuck in a cultural oasis as many would have you believe. No sir! You should visit some of the heritage sites of the north,there are plenty of pubs to choose from and when I say pub I mean it in the truest sense of the word.
A great post.

Su-Lin, certainly! It’s a tiny place but it has a decent selection of necessary ingredients.

Miles, next trip! I am really quite taken with your country….

For some reason today reading about your adventures made me remember our road trip from WI to MT(I have a hard time believing that was 19 years ago)- your travels have become far more interesting! I would love to tag a long someday on one of your current adventures!

Hi Karen – so nice to have you drop by my site! I’ve never been to Mum’s House but I guess I don’t need to, with a steady supply from friends and family 🙂

Happy, I refuse to believe that was 19 years ago! Funny, I’ve been thinking lately of our summer in Hawaii. We were so young then. But what a great way to spend our first college summer! I’ve often wanted to go hiking again for strawberry guavas — remember those?

Thanks, Meemalee. I look forward to reading more recipes on your site!

Sorry, Trig. Next time I’ll ask for your guiding expertise as well 🙂