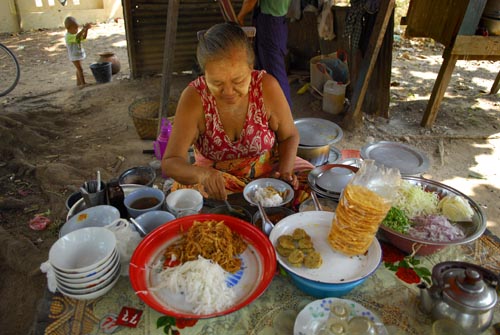 Just a few days after we met the owners of Ancient House, we learned they would be leaving. Their small Siem Reap business couldn’t outlast the economic crisis, so they’ve decided to sell. If they get a decent price, perhaps they’ll go home. If not? Too many people are asking themselves that question now. We are of course saddened by this news, but they are far from alone. I expect to see a lot of closed doors in Siem Reap this year.

After my post on the Ancient House mohinga night, some of you asked for a recipe. Now, mohinga comes in many forms and every chef has his or her own secrets to the process. Some mohingas are distinct to region, even town or village. Some varieties contain banana stem (a really interesting part of the plant also found in some Thai and Cambodian curries and soups), some with black pepper rather than red. This is a subject I’ll write more about in the future. But the last night we visited Ancient House, the owners shared with me their version of the soup. Nothing written, no formal instructions, just a list of ingredients and a gentle nudge as to how they should be prepared. You need:

It’s simple, I’m told. Boil the fish and remove the bones. Pound the lemongrass, onion and garlic (she didn’t mention turmeric, but I suspect it might belong on the list). Mix everything together, add water, cook and serve over rice noodles. Top with fritters, fresh lime, chile, cilantro. Now, I realize this isn’t very specific and many people prefer detailed directions and measurements. So I give you a link to another mohinga recipe on the informative hsa*ba site. While you’re there, browse a bit. It’s a good little corner of the food blogosphere. 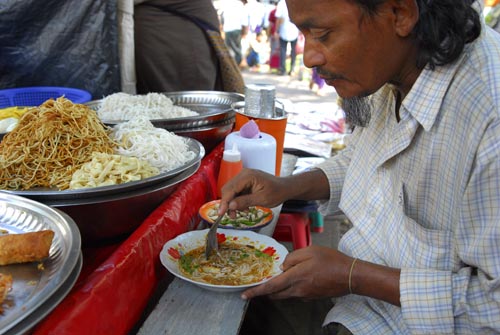 Great idea. We love food from this part of the world and we’ve been cooking lots with catfish (U.S. farmed) lately. But we don’t need the carbs, so would probably skip the noodles.

As usual, the photos really tell it all.

I read this before breakfast – not a good idea. Now I’m dreaming of a bowl of fresh mohinga for breakfast…something I’m not going to find here in Guatemala.

What amazes me is how this recipe seems a bit complex and difficult to me, yet tiny street food stands churn out incredible bowls of mohinga using the most simple of cooking tools. The trick is all the fresh ingredients.

I love reading your blog and seeing the incredible photos, but I have to admit it makes me really homesick for southeast Asia and its food!