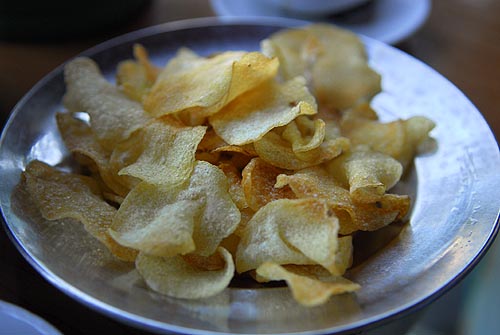 This one goes out as an early birthday wish for Gary, fervent lover of The Chip. He prefers Kettle brand, but I find my favorites on Myanmar’s savory streets.

We sat one afternoon in a Burmese tea shop when an old woman ran up with a plate of chips. “Here, here, eat!” We did, she smiled, and a moment later she returned with more chips. A heap of chips, then another, they kept on coming. What was this all about? We stepped outside for a look. 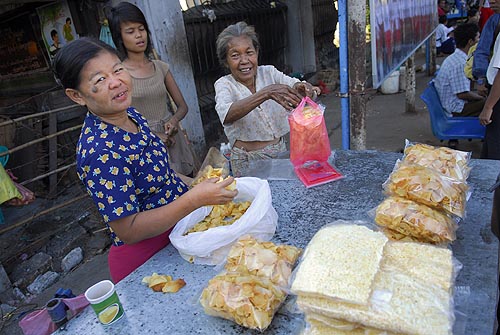 There on the sidewalk, three generations of women had a little chip operation. The eldest, who liked her cheroots, watched over a bubbling wok of sliced potatoes. 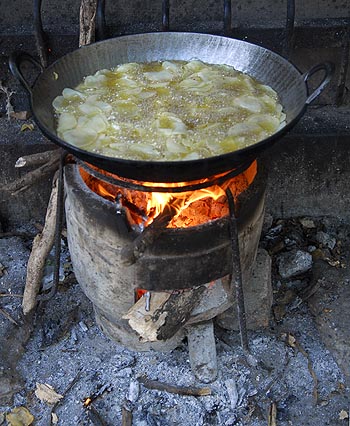 When they were fried and dried, the middle-aged woman stuffed the crispy chips into plastic bags…. 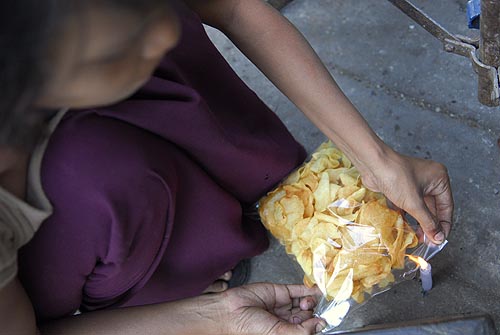 …then the youngest sealed the bags by candlelight.

The women had given us so many chips and so much of their time as we stopped to watch and photograph their lineup. I tried to pay them, but they wouldn’t allow me. So I bought a bag of crispy rice snacks, another of their specialties, but they still didn’t want my money. I ended up shoving it into the women’s hands and stepping backward. They welcomed us to their country and wished us well.

I love Burmese tater chips. They’re also available on the street in dried slices, which are handy for taking home and frying in your own kitchen. I did that for Gary several years ago. Maybe it’s time for another bag….

(P.S. Yangon is a great place to catch a flick. Cheap tickets (about $1.50), relatively new releases,Â and locally made tater chips for sale!)

6 replies on “The Chip Women”

Hmmmm fresh potato chips! Sounds yummy…that plus a beer, would you be able to leave?
hehe
have fun there!

yum, homemade chips are the best! isn’t it amazing that these people have so much less than us yet we could do well to learn a lesson in kindness and generosity from them. my friend and i have been contemplating a trip to Burma aka Myanmar. your little posts have sealed the deal!

That is awesome! They look so perfectly crispy. I like Jimmy John’s kettle chips but buying a bag from them is no where as interesting an experience as yours! Thanks for sharing!

Beautiful people, I love the smile on the old womans face.Delicious chips too!