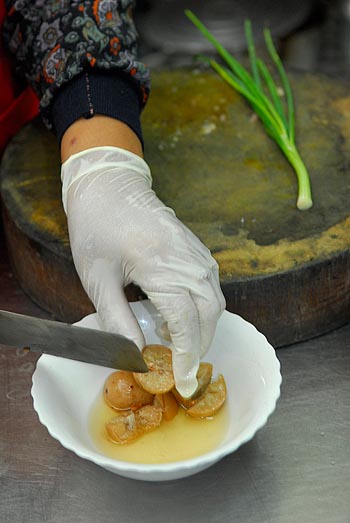 When we first arrived in Phnom Penh, in early March, all of the young waiters at the Veiyo Tonle restaurant had shaved their heads. With great sadness, manager Neth informed us their beloved Grandma had died that week and she was cremated that day. Many on staff had come through the New Cambodian Children’s Life Association, the orphanage and children’s group supported by the nonprofit restaurant. Grandma had oodles of kids who loved her dearly.

It was a sad awakening for us, as well. Grandma had long served as the inspiration in the Veiyo Tonle kitchen. While the restaurant is perhaps best known for its pizzas, it’s Khmer food hadâ€”and still hasâ€”Grandma’s magic hands. This is especially true if you order off the menu.

We’ve known Neth for a long time, and his riverfront spot helped us through some of Phnom Penh’s shakiest moments during our early years there. I still remember the first vivid spoonful of Grandma’s pickled lime soup. If you’ve never had pickled limes, I’m not sure I can adequately describe for you the experience. It’s such a wonderfully sharp sensation on the tongue, like nothing else I have ever tasted. Pickled lime soup with chicken is a common item on traditional Khmer menus, but it the Veiyo Tonle version I will always recall best. 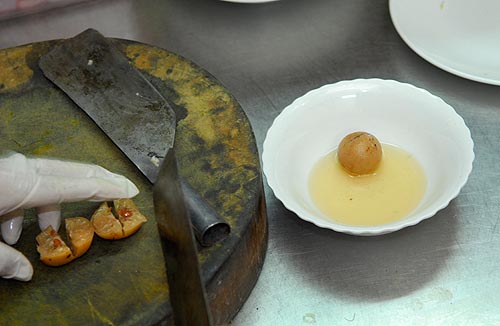 A few weeks after Grandma died, we bumped into Neth in Siem Reap. He called it a “treasure” when people who have known each other for so long continue to meet. Turns out, he was up there helping his sister manage her restaurant, Le Grand Cafe, in one of the city’s most beautifully restored colonial buildings on a prime corner near the Old Market. He brought a few helpers from his own business and decided to put the profits from Le Grand into the orphanage.

We stayed for dinner that night. Le Grand also serves pickled lime soup, so we ate a bowl while sitting beside the arch of an upstairs window, watching the street below. I asked Lay Neth for the recipe and he returned to the table with an impossibly simple list:

Boil half a liter of water, add half a kilogram of chicken. Cover and bring to a boil again. Add a pinch of salt and sugar (and a bit of MSG if you like). Shred the chicken meat before serving. Add one pickled lime, sliced, and a handful of chopped green onion. That’s it.

The limes are easy to prepare at home, especially if you live in a hot climate. Dry a bunch of limes in the sun. Boil a small pot of water, add the limes and immediately pour into a transparent jar with a little salt. Cover at least one week, until the limes begin to turn brown. Use one at a time (one is hugely pungent!). They will last this way for a month or two. 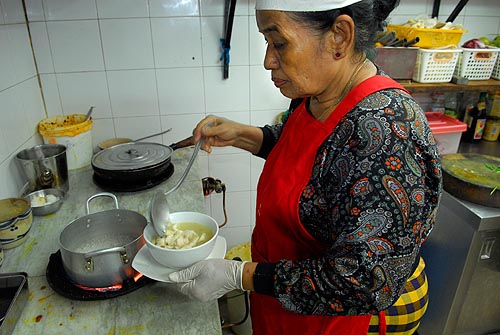 When we returned to Phnom Penh, Neth was out of town, but we were invited into the kitchen to watch a veteran cook named Roam prepare the soup. She did as above, but she also cooked her chicken with large slivers of garlic. It took all but a few minutes. “Very easy. Finished already.” Fresh green onion topped the steaming soup. As we left the kitchen, preparing to eat, Roam thanked us for coming and she swaddled me in a giant hug. 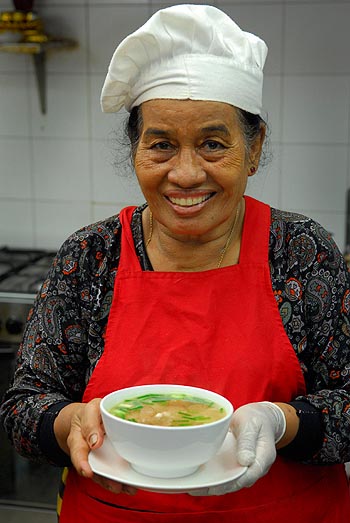 P.S. All of this got me thinking about an ode to the Asian lime. But I’ll direct you to that story on another day….

6 replies on “An Ode to a Grandmother”

What a nice tribute, wish I had the chance to try her soup.
We got a jar of pickled limes from Ta Lin once and didn’t know what to do with them…now we know!
Thanks for the recipe!

Life is all about change, isn’t it?! Although the irony is that the internet allows me to stumble onto timeless little gems that you put on display months ago. To you it was many experiences ago (sadly, when Gourmet was still vibrant 🙁 ), but for me this recipe is quite a timely tartly taste temptation- I’m trolling for such recipes to enjoy in a cooking group that I’ve started. But the recipes are only half the beauty- there are people making the food are your experience descriptions (including the photos!) are wonderfully rich and essential (i.e. capturing the essence).
In your last sentence, you mentioned that you might talk about the Asian lime- is that the Kefir? I’ve been throwing the fruit away to increase the leaf growth, but is this a good one to pickle?

fillsfotos, thank you. You can never go wrong with this pickled lime soup. My tribute to limes ended up as this: http://www.gourmet.com/food/2009/07/eight-great-things-to-do-with-limes. Not sure how much longer the website will remain, but I’m creating my own archive of Gourmet posts for future reference. The Kaffir lime, as you know, is prized for its leaf… and also its zest, which is used in curry paste. The juice is generally not consumed, although it can be used for rinsing your hair (supposedly prevents hair loss).

[…] recipe was inspired by Karen Coates’ travels to Cambodia. My version includes lemongrass because it is growing like crazy in my garden and I thought this […]