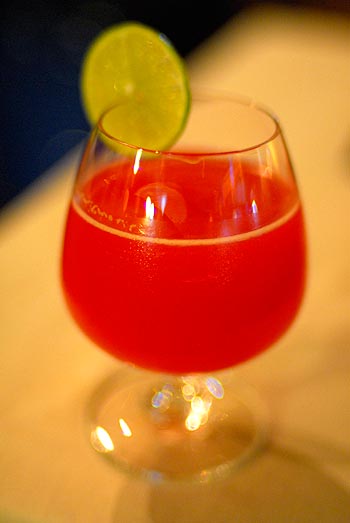 We stumbled across a Burmese restaurant in Siem Reap last week. One little chezu tinbade from Jerry, and the Ancient House staff welcomed us like family. We’ve eaten there three times now, enjoying their Burmese salads, sour soups and curries. The generous woman in charge invited us for Saturday night mohinga, a tradition she and her husband share with friends who come to chat over bowls of Myanmar fish soup. Of course, we’d love to join!

After a day spent in blazing sun on the Tonle Sap (and a few hours of bottom-bruising dirt roads via motorbike) Jerry and I were ready to eat. She served heaping bowls of thick fish-rich soup over rice vermicelli, topped with chopped cilantro, fish sauce and hot chile. More noodles, more soup–we ate our fill. When we finally asked for the bill, it arrived with the total for our drinks but nothing else. “I invited you,” she said. We tried, but she would not allow us to pay for the food.

OK, then, we’ll have two more drinks. A moment passed, and the husband arrived at our table. He wanted to offer us the Ancient House special cocktail: Triple Sec, whisky, pineapple juice and orange juice. “Will you accept?”

Of course. That sounded delightful.

When all was drunk (though not quite drunken) and again we asked for the bill, our efforts fell flat. The drinks were a gift to us as well. We protested, to no avail. Burmese generosity runs swift and strong. “The Burmese make us better people,” Jerry said.

You won’t find much online about this little spot near Siem Reap’s Psa Chas (Old Market). If you happen to be in the neighborhood, I highly recommend a nosh. Look for the Ancient House around the corner from Pub Street, across from the Funky Munky.

That really is extraordinary.

I’d love the recipe for the soup. Do you know where I might find one? Thanks.

I am always amazed by the hospitality of others from places afar. The drink sounds wonderful and the company even better.

That soup sounds delicious – hope you’ll work up a recipe! did you come across many dishes made with tea leaves? Susan

Please stay tuned for more on mohinga in the future (it might take a while). The soup varies from region to region, and many cooks have their own special recipes. In Yangon, I had a particularly tasty Delta variety with heat derived from black peppercorn rather than chile. Some mohingas come with egg, others with banana trunk; many are served with crispy fritters.

[…] a few days after we met the owners of Ancient House, we learned they would be leaving. Their small Siem Reap business couldn’t outlast the […]

Waht a great blog article. Thanks. Have been reading through your archives and you have some great stories.