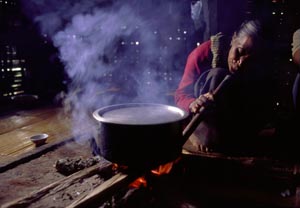 Last week, one of the Burmese journalists in the IMMF class gave me a package of mohinga. What a gift! Mohinga is a national dish of Burma, frequently eaten for breakfast. It’s a rich fish-based broth with rice noodles, turmeric, ginger, onion, chili, banana stem…. many ingredients. It’s an intricate dish to prepare from scratch, and I haven’t eaten it since we visited Burma. I had told my IMMF friend that I miss mohinga; it was one of my favorite dishes in Burma. And the next day she came to me with a package in hand! All I have to do is sprinkle the various packets into boiling water, add the noodles and vegetables, and I’ll have mohinga in no time.

All this thought of mohinga has made me nostalgic for Burma, this battered country with its military junta, but a populace that ranks among the kindest, most thoughtful and well-read in the world. But that’s a topic for another essay.

Here, now, I want to talk about breakfast in Burma, about the mornings I remember in Yangon. I am not a morning person, but I love the early hours in countries like these, where the light makes everything glisten and life rises to its daily routine. I scroll through old notes and find the descriptions of breakfast in the back-room restaurant of our Yangon guesthouse (as is typical in Asia, breakfast comes with the room… and here it was actually good, though the room a bit stuffy):

Every breakfast is a treat. Today is a particular treat because we order mohinga, traditional rice noodles in sour fish soup, and it’s delicious. The waiter turns the TV channel to the national station, and everyone in the room must watch the news. It is this way every morning â€” national and international newscasts, daily tourism highlights, English lessons, Burmese cooking tips and always something patriotic in song.

Today we learn many things: how to make rice powder fish; how to properly use prepositions (rules subsequently broken in the newscast); all about a productive dry dock, Inle Lake and traditional silk weaving. And very important newscasts: A feature on taro farming in Japan, a new Burmese hydrogenerator that will produce power for 70 homes, the 57th anniversary of UN Day, and a delegation of nine Italians who have just arrived for a visit. After a news report on a new dam, a troupe of silk-clad women sing on stage before a picture of said dam.

We spend that afternoon in a tea shop up the street, a white-tiled room with bad acoustics that only add flavor to the boisterous experience. Smoking, reading, nibbling, discussing. Books for sale on the counter beside cheroots and chopsticks and cigs. The tea flows and mouths pour. Weâ€™ve read â€” and heard â€” that spooks frequent these shops, watching and listening for blasphemes. Indeed, we seem to encounter many watchful eyes, men in longyis who linger a litle too long. Perhaps itâ€™s imagination, perhaps not, but we rarely seem to be alone.

But mostly, Burmese come up to us on the street and ask if we need help. They point us to the restaurant we seek, they arrange a taxi to our hotel, they tell us legends of Buddhist festivals, they help us buy bus tickets. And they seem to want nothing in return. Nothing but conversation. Nothing but the chance to whisper in our ears their opinion of the Burmese government.

In morning, we wake again to ravens, overcast sky and someone vomiting in a nearby room. The news starts with women and soldiers passing out all manner of plastic items to a crowd of 4-year-olds on their way to pre-school. The kids get plastic blow-up hands, plastic juice pitchers, plastic baskets. Our waiter says this is typical, this dissemination of goods before children head off to school.

These breakfast shows teach us about Chinaâ€™s aging population, 130 million people over 60; and about Malaysian beads, once used as currency as well as decoration for hats and other attire.

And then we learn the song. Children gather on stage to sing of the weather that determines the course of their day:

â€œWind, wind, all your might
Hot and sticky, we donâ€™t like.â€

The children stand with great formality, reciting lines and setting an example for the public. These mornings are strange and precious, with mohinga in our bowls and the quirkiness of Burma up there on the TV screen, watching us as we eat. 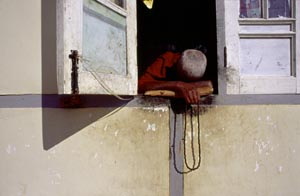 A monk in Kalaw rests his head upon his bedroom window 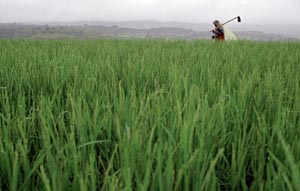 The rice fields of Burma

One thought on “Breakfast in Burma”