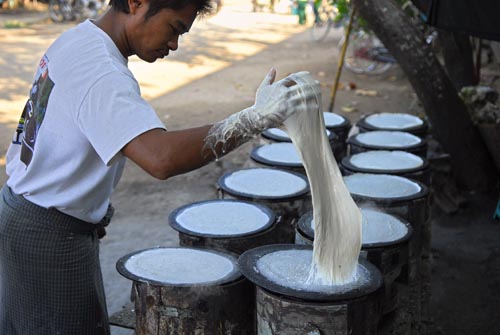 We rise early to catch a cramped little bus to the beach. Just around the corner from the Pathein bus station is a small crepe factory with two rows of 12 griddles atop charcoal cookers. Three people work, as does an enormous mixer powered by a motor that turns a giant three-pronged blade. Black exhaust spews from the contraption as a young man pours water into the mix. 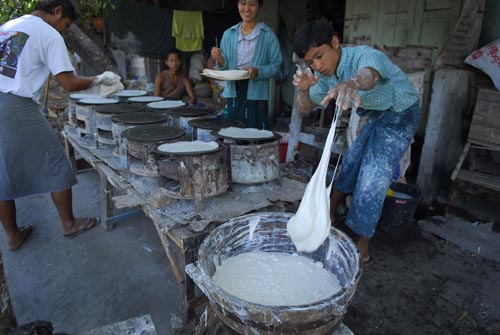 He lets it churn a few minutes, then flings the dough into a tub. He plunks himself down on a seat beside the tub, beneath a tree to which a little wooden shelf is nailed. Atop the shelf is a radio that sings into the man’s left ear. 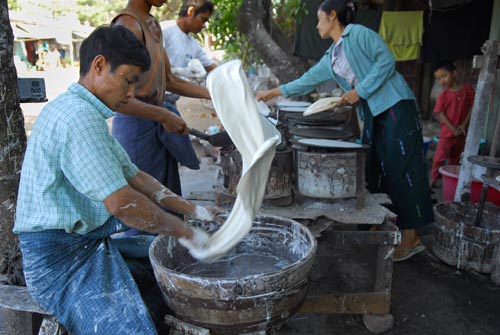 He pounds and tosses the dough; it leaps into the air, stretching and somersaulting in fantastic gymnastics. Then an older man grabs a handful and begins to smear each griddle with a smidgen of the mixture, which sizzles and steams and takes the shape of a crepe. Just when each piece turns crispy, a woman with a smear of thanaka on her face pries the hot crepes from the fiery griddles and stacks them in her hand. 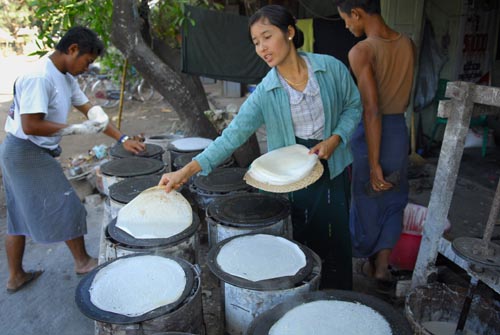 See, playing with your food can be productive too! Looks like fun.

Karen,
When I was a chef de partie working in Germany the Head Chef stitched me up by getting me to make two hundred minature crepes for New Years Eve with two frying pans. I’ve hated them ever since.

Congrats on making the top 50! Great photos. I miss Asia very much. Reading your blog brings back great memories. thanks.

Thanks for the photo compliments, all! These were super-tasty crepes.

Alisa, the Burmese do have fun with their food!

Miles, you poor thing. Damaged goods, you are.

Cherie, thanks! Come back and visit sometime….

What did they put in the crepes? A little seafood with hotsauce?
Nice pics big bro!

Dear Little Sister,
This is just the street-side crepe factory. Normally, they fill them with delights most savoury. On Chinese New Year in Yangon I got one with spiced onions and BEANS. They put beans in everything there. It’s lovely.

Could you possibly make your type darker in color?

Lynn, thanks for the suggestion. Yes, we will work on that, but it will have to be part of an update to the site’s design in a few months. Unfortunately, there’s no easy fix. Meanwhile, you could try enlarging the text on your screen.

These are really interesting photos!