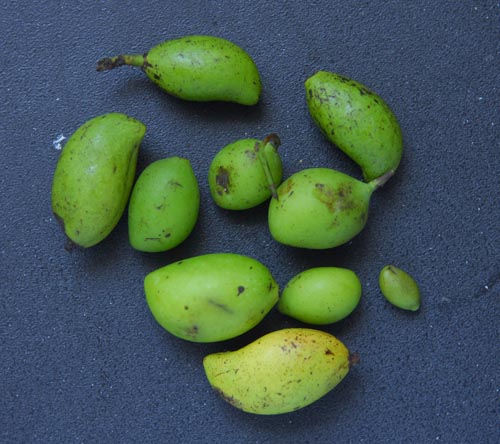 It is almost the season, but not quite. Not quite that time of year when the best and freshest sweet mangoes appear on streets and tables everywhere. I still remember my first early months in Cambodia a decade ago. I used to work the night shift and walked from our house, up Street 63 to the office on Street 240 (long before it became boutique-y), and along the way I passed a small market. It was late February and the women out front had their first bushels of mangoes–my first encounter with the sweetest real things. I have eaten many kilos of mangoes since then, but I will always associate Cambodia with the best of the bunch.

It’s common across Southeast Asia to use tart green mango in salads or spicy side dishes for fish. But I had never before seen such tiny mangoes as these–the size of a fingernail. I buy a handful and show the bag to my rickshaw driver in Mandalay. He smiles. “We pound with chile and salt,” he says. The dip is eaten with fish. Sour, he says. He likes it, “but the little ones are very expensive.” I paid 200 kyat, about 20 cents, for the handful. Soon, he says, juicy yellow mangoes will flood the markets. “Big mangoes very cheap.”

4 replies on “Meet the Mini Mango”

ooo I love the sound of that dip!

Mangoes are a sign that mother nature wants us to be happy.

Hey Karen, congrats of being one of the top 50 foodblogs in Times Online. So happy for you!http://www.timesonline.co.uk/tol/life_and_style/food_and_drink/real_food/article5561425.ece

Maninas, yes, it does sound inviting.

Thanks, Janet! I just got an email about it and will post something soon.