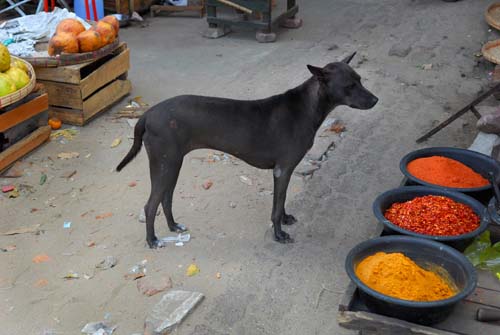 We are back. It’s a short flight from Yangon to Bangkok, barely an hour, but it feels like a journey between worlds. Time jumps forward at touchdown: 9:30 a.m. in Burma is 10 a.m. in Bangkok. The former sets a pace 30 minutes askew to the rest of the region. (Nicholas Kristof mentioned this time differential in a recent column, but he seemed to be setting his watch a different way.) Author Chris Offutt once wrote that time doesn’t move forward, people move through it instead. Humanity has its own comings and goings, but time stands still around the commotion.

It’s that way in Burma. “What do you see?” a friend asked me upon my return to Yangon after six years. I told her a few new buildings and billboards, a few cell phones and Internet shops (though connections flickered on and off), but little else different for the people. “That is right,” she said. But the Burmese people move—constantly, swiftly, with necessity. And the moving is never easy. Rusty old Toyota taxis with broken windows and missing knobs; buses crammed with bodies, bumping over potholed streets; rickshaws with wobbly wheels and drivers with cracked and callused feet.

We spent 18 hours on an overnight ferry to the city of Pathein. We slept in the open, on the hard metal floor above the rumbling engines one deck down. Each passenger was given a rectangle of space, approximately 2 ½ feet wide and 6 feet long, for body and luggage. I counted 130 people squeezed together, head to head, toe to toe. Everyone was kind and polite, making careful strides so as not to step on another passenger’s mat when moving from his or her spot to the foul, fetid bathroom. Vendors came through, shouting their offers of fish and rice, fried fritters and fruit, and a pickled tea-leaf salad, called laphet thote, which is particular to Burma.

Monks slept among the crowd, a few inches higher than everyone else, on a wooden platform reserved for men in robes. Cops and soldiers traveled with wives and babies, sleeping and eating like everyone else, except for rifles at their sides. A friendly young student plopped himself down on my mat, eager to speak English. He offered me a gift of apples. He said he had traveled this route by ferry several times. “It is comfortable for me,” though he slept only 5 minutes through the night. Perhaps comfort lay in cost—the bus, which takes only 7 hours, costs 5,000 kyat, about 10 times the price a Burmese pays for this ferry (foreigners pay $7).

In Mandalay the following week (after a 7-hour bus ride back to Yangon and a 14-hour overnight bus north), Jerry and I went looking for workers. Jerry, among 120 photographers around the world, was shooting “hope and change” on Obama’s inauguration day, a project that will culminate in a book published in Japan.

As our newfound friend and rickshaw driver explained, hope takes two forms in Myanmar. People make merit for the next life; in this life, they hope for tomorrow’s rice. Most people don’t think a whole lot beyond that, he said. Rice takes precedence. Rice means life. And so the people work.

Jerry met young boys hustling from table to table in a tea shop, having left their village homes and abandoned their studies for a chance to earn money and send it home. He talked to men and women banging the dents out of old barrels, and women stacking bricks atop their heads, toting them up and down the steps of a construction site. He met nuns chopping firewood and monks digging out clogged sewer lines—their burgundy robes forever stained.

But in places of such severity we seem to find the people of greatest sincerity. One young writer I know started an “association” with four of his friends. It started as a book club, with members meeting to discuss whatever works of contemporary literature made their way past the gates and into the hands of Burmese translators (your first encounter with a Burmese bookworm likely will spiral into an analysis of Thomas Friedman and his Flat World). In the past year, the association has grown beyond books. These five colleagues are sending two children to school, raising money to pay the $200 a year it costs each child in tuition, fees, uniforms, books and materials. My friend earns $100 a month as his publication’s chief news editor. Somehow, after rent and food and the costs of supporting a wife and new baby, he finds spare change for a couple of overlooked kids.

The final leg of our journey had us in Yangon, with Jerry’s photo exhibit of New Mexico and Myanmar, the Southwest desert side by side with rice harvests and Yangon train rides. That week I taught creative nonfiction writing to 18 working writers. I expected to enjoy the class; I never expected to passionately love it so. In one week, 36 eyes opened. They never knew they could write for themselves, in a style their own. I won’t say much more about that here. If you really want to know, email me.

In any case, welcome back! I’m on assignment this week and Jerry next, so it might take some time for us to put stories and photos together. But stay tuned. 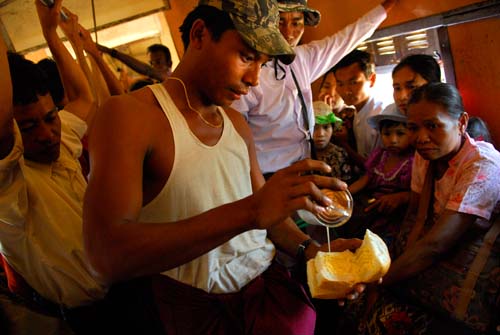 Hey Karen and Jerry – welcome back! I’ve been wondering how you’ve been getting on in Burma – would
love to hear your tales; I’m sure you have plenty. I’d definitely like to hear more about teaching creative
writing there too. Guy and I are teaching the Food & Drink journalism course at City University here in
London (Guy has taught it for three years but this is my first term). I’m finding it
daunting but fun so would be great to find out what it was like for your Burmese students.

Anyway, welcome back and happy trails,

Susan, thanks. I’m sending you an email right now with further info. Likewise, let me know how your course goes. Cheers, Karen

Hi Karen, it’s amazing to read your travel experiences in Asia and trying all kinds of exotic food.

Thanks, Janet. I won’t reveal all the details of the exotic food bug that hit my gut this last trip. First time I’ve had to take antibiotics in years!

[…] Day of Change, the Courrier Japon project that took place on Obama’s inauguration day, is taking shape. The book is expected by the end of April. Click here to see examples […]