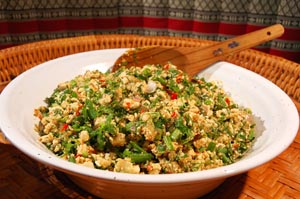 I’ve been addicted to laap (or larb or larp, depending on where in Thailand or Laos it’s served) since the first time I ate it in southern Laos about eight years ago. Laap is a magnificent ground meat dish with oodles of herbs, onions, fresh chili, fish sauce, lime and a little toasted rice powder. It can be made with chicken, pork, beef, fish, tofu, duck or even buffalo. The dish also hails from the Issan area in northeastern Thailand and is widely available throughout the country. But I love Lao laap the best — so fresh and healthy, so spicy and not too sweet. When I make this dish for friends and family back home, I usually fetch a few looks of astonishment at the quantity of herbs used in laap. That much?!!? Yes, that much. (Take a look at last month’s post on herbs to get an idea of how much. All three baskets, chopped into little bits.)

When I returned home to Wisconsin a few weeks ago, I set out to re-create my ultimate favorite roasted eggplant laap for my dear friends McKenna, Chandler and baby Callow (otherwise known, among mutual friends, as “The Yahoos”). This version is based on a fish laap that Jerry and I ate at a little restaurant in Luang Prabang, with tables set on the banks of the Mekong. McKenna is expecting Baby #2, and fish just doesn’t appeal to her nose these days, so I made it with chicken instead — which still mingled beautifully with the eggplant and its partner ingredient, fresh dill. The combination is simply divine. I made it again the other night for Jerry, this time with tofu.

So here goes the recipe for a not-entirely-authentic Lao roasted eggplant and dill laap. Now bear in mind, this is the way Jerry, The Yahoos (even baby Callow!) and I like it, with lots of intense flavors and heat. Adjust the ingredients to your liking. This will make enough for a side dish served to a crowd, or the main meal for four people. Halve the recipe if you prefer a smaller dish. It’s a perfect salad for hot summer nights:

Slice the eggplants in half lengthwise (or in quarters if using large purple eggplants) and baste with a little oil. Grill until the flesh is soft and pungent, but not burned. Set aside to cool.

In a dry wok, toast the rice grains until they turn opaque. Remove from heat and grind into a fine powder using a mortar and pestle. Set aside.

Remove the skins from the eggplants (the flesh should peel away with relative ease). Use a mortar and pestle or food processor to mash the eggplant flesh.

When the fried meat is cool, mix with the mashed eggplant, then add to the bowl of chopped herbs. Chop the fresh chilies and add to the bowl. Mix continuously while drizzling the remaining fish sauce, vinegar, sesame oil and lime juice over the ingredients. Taste and add more accordingly. Mix in the pounded rice, a little at a time. Set aside for at least half an hour to let the flavors mingle (you might want to add more fish sauce, sesame and lime just before serving). If it’s not hot enough, add more fresh chili. When ready to eat, line a serving bowl with lettuce leaves and pile the laap into the bowl.

In Asia, laap is generally served with sticky rice, but you can eat it with regular rice if you prefer. Or try it as a side dish. Serve it at a potluck. Gauge your guests’ reactions (some people might find the herbs overwhelming if they aren’t used to such quantities of freshness). And if you’ve made it quite spicy, some people may be surprised the next morning to learn how quickly a good laap will clean out the system. Don’t worry — it’s healthy. It’s one of the healthiest dishes on earth.

By the way, you may be wondering how baby Callow, just 20 months, dealt with this dish. She loved it. She loves anything spicy and she adores garlic. She eats it raw off the cutting board. Callow likes rice and beans for breakfast, and she picks fresh herbs from The Yahoos’ garden. She’ll eat anything pungent. Sometimes her parents wonder whether she has tastebuds. But they figure eventually she’ll go off to school and she’ll quickly learn from the other kids that it just isn’t cool to eat so much garlic in America. The Yahoos admit they have a stinky little girl.

Callow sounds like a smart little girl kids who like flavorful food will be far more adventourous in life I think, in our house James(25 months) is following in his daddies foot steps and likes anything with red chiles, jalapenos, habaneros and one of his most favorite snacks wasabi peas.

Wow — sounds delicious. Looking forward to trying it and to hearing about what else little Miss Callow will eat! Thank you for posting!

Callow LOVED this laap, and especially enjoyed stealing bis of raw garlic before they were mixed in with everything else. Surprisingly, this was a huge hit when Karen made it for our Wisconsin Memorial Day weekend party, even though half the guests were seriously zonked by the sheer magnitude of garlic and spice from the chilies. I’m looking forward to making it again!

K,
What are rice GRAINS? never heard of it. AND since you know I don’t care for a lot of fish sauce, or pickled anything , would changing these or severly reducing the amounts make a big difference? in your opinion..
And anyone who eats raw garlic, IMHO is probably a great human being in spite of all the people standing upwind from them..

Andy – By rice grains, I mean a small amount of raw rice.

It’s a sad thing, your aversion to fish sauce and all things pickled. I’ve often made laap without pickled garlic and it’s still great as long as you have enough lime for that tangy acidic flavor. As for no fish sauce, you’ll need some salt. Try it with soy sauce and see what it tastes like. Soy and sesame make a great combination, so that might work.

My apologies for “BAD BUDS’ however I can take it ( fish sauce/pickled stuff ) small doses. The fish sauce just seems to overpower any meal that passes over the tastebuds.. I’ll try the alternatives and give a holler when I do.

[…] parts), with bounties of fresh herbs, tangy citrus and crunchy toasted rice powder. At home, I make it my own way, often with tofu. But this is something else. This one catches my attention, too. It’s my own […]

Laap gets a mention in the magazine “Forbes Travel” in an article on Laos. Unfortunately the writer didn’t like Laap at all, and doesn’t mention any palatable variants. But Laos does sound like an inviting place. I feel like the folks here should be the ones to enlighten the author. 🙂