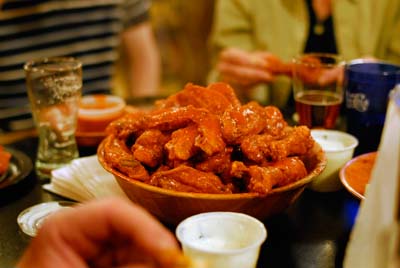 The most widely recited wing story puts their origins at Buffalo’s Anchor Bar in 1964. Calvin Trillin has another version, but the extended Redfern family and all associated hangers-on, having lived most their lives in upstate New York, insist the Anchor Bar is the place.

But it’s not THE place.

THE place for Buffalo wings is an entirely different beast called Duff’s, a consistent winner in local taste tests. Now I know, wings are like every other favorite foodâ€”like riceâ€”and everyone has his or her own uniquely informed opinion. And I never did get to taste the originals at the Anchor (someday I will). But Duff’s were pretty darn tasty.

How to judge a wing? Uncle Al says it’s all about the meat and sauce. Great wings aren’t just skin and bone. You can actually taste the meat beneath a crispy skin smothered in tangy sauce. Real wings are never breaded, consequently they are gluten-free (cousin Patrick even called his old college buddy, who has celiac, just to make sure that I could safely indulge). 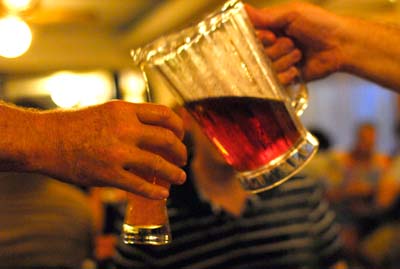 Wherever you get them, authentic-style wings are nothing more than the meat fried with butter or margarine and hot sauce, served with carrot and celery sticks and a side of bleu cheese. And beer, of course (not gluten-free). Duff’s serves up steaming bowls of 10, 20, 30 or 50 wings in a variety of sauces ranging from mild to hot, with side sauce options rating “suicidal” and “death.” Our end of the table ordered hot death, which arrived as a sea of red with mountains of meat floating in all that sticky, tangy, drippy goodness; plus an extra little bowl of death sauce to jazz up the hot sauce.

Some of us needed an anti-stain stick. 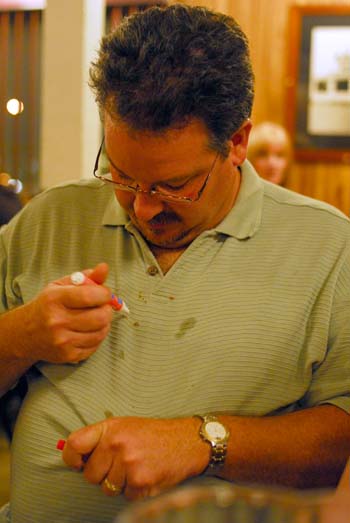 Patrick, robust young man that he is, eyed that bowl of 50 death wings and felt compelled to finish them off. He put in an honorable effort but stopped a few wings short. Wise decision, I think. 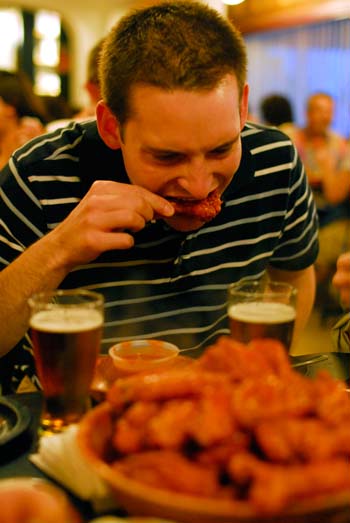 By meal’s end, we had accumulated several plastic buckets with napkins and bones, our bellies filled to the fullest. My verdict? Best wings I’ve ever hadâ€”with the caveat that I have yet to try the place. 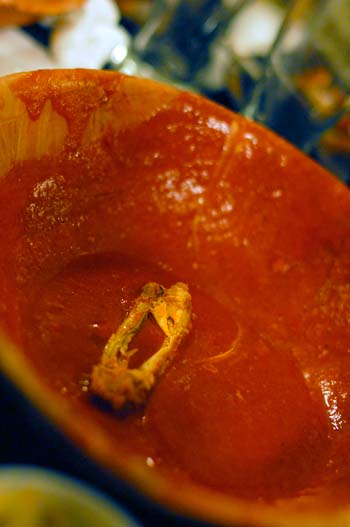 3 thoughts on “THE Place for Buffalo Wings”