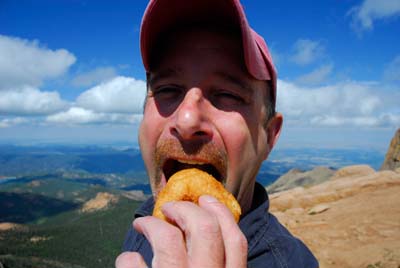 Apparently, a donut is not a donut is not a donut. At least not when they’re made at 14,115 feet (which is, by the way, the accurate elevation of Pikes Peak, despite the maps and signs that put the mountain 5 feet lower.) I didn’t actually eat these fried little dough delightsâ€”the gluten thing, you knowâ€”but I watched Jerry and our good friend Christian partake. They’re “crispy and airy,” Christian says, “with just a little slight taste of oil,” and they must be eaten on the mountaintop. “When you get them down to [lower] elevation, then they aren’t as good.”

That has something to do with the laws of science. At sea level, water boils at 212 degrees. That temperature drops as air pressure decreases the higher you go. That means boiled foods must be cooked longer, or they won’t be cooked enough. And you need a lower temperature for deep fat frying, otherwise the outside of your food will brown before the inside cooks through.

I’m told the folks at Pikes Peak have a special high-elevation recipe for their donuts. I suspect, in addition to frying at a lower temperature, they cut thinner donuts to avoid mushy insides with crispy outsides. 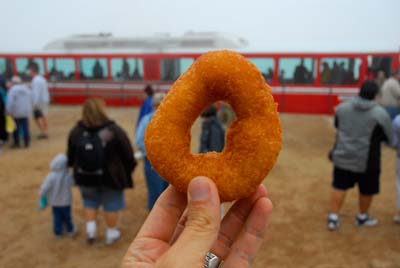 In any case, the air is rather thin up there. We drove to the top (you have optionsâ€”road, cog railway, trail) and hit a layer of clouds. Couldn’t see a thing at the summit, but we had spectacular views a few hundred feet lower. Note Christian, professional photojournalist, shooting his donut with a cell phone. 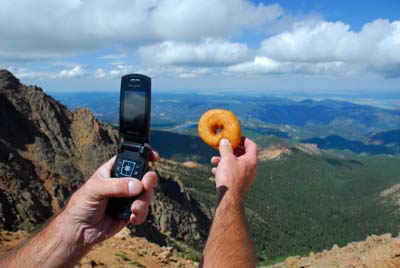 (Completely insane, but I still want to try that race someday.)

Up next: Buffalo wings in Buffalo….

One reply on “Pikes Peak Donuts”