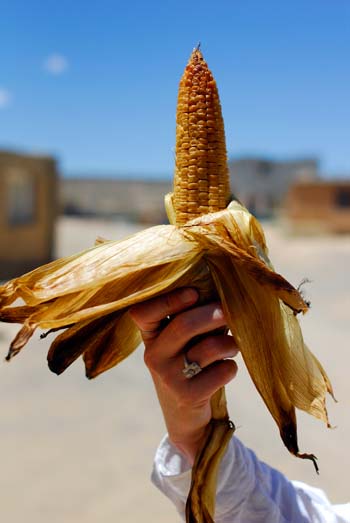 It’s considered the longest continually occupied settlement in the United States. Acoma Pueblo sits atop a 367-foot sandstone mesa that hits 7,000 feetâ€”high enough, the sun feels close and the wind ardently fierce. This place was founded in the 12th century. Just a handful of people live here now, but tourists come by the busload to peek at the puebloans’ past (and eat an ear or two of roasted corn, hot from the horno). 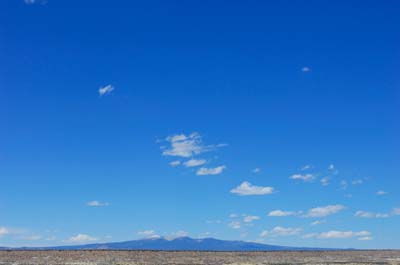 A 17th century church rests up here, San Esteban, with conspicuously old walls and history as thick as the doors. But don’t expect your pueblo guide (and you must have one to get up here) to wax poetic about the good years past. He’ll tell you one of those massive church bells was given to the people in exchange for children, who were enslaved in Mexico. And he’ll tell you the upstairs open-air porch served as a classroom for students learning Spanish; those who refused to study the language were sent downstairs to a dungeon of a dark, stifling room. 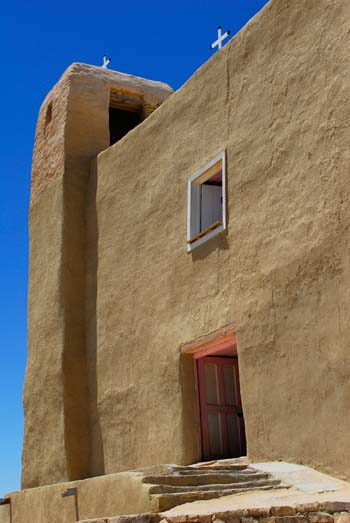 Today, most folks live off the mesa, closer to I-40 near the Sky City casino and travel center. But it’s definitely worth the 15-mile drive to the visitor center, where you buy your tickets for a trip up the hill. While waiting for the next bus, have a look at the recently opened Haak’u Museum (with pueblo art and photography as well as a superb exhibit of the famous Acoma pottery).

When you get up top, don’t lose yourself in the crowds on Main Street…. 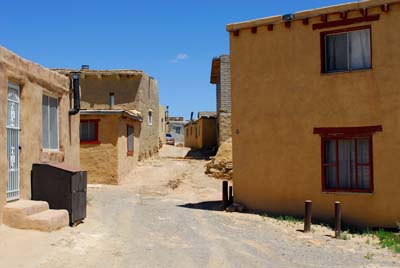 And don’t forget to go before you go up: 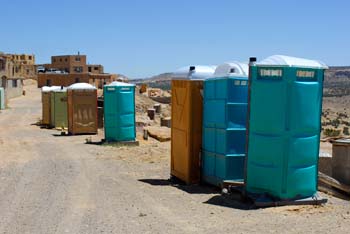 No plumbing on the pueblo. But there is a watering hole: 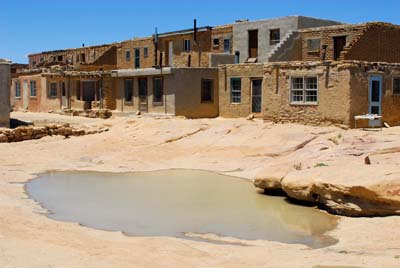 And a man with his dog, Lobo: 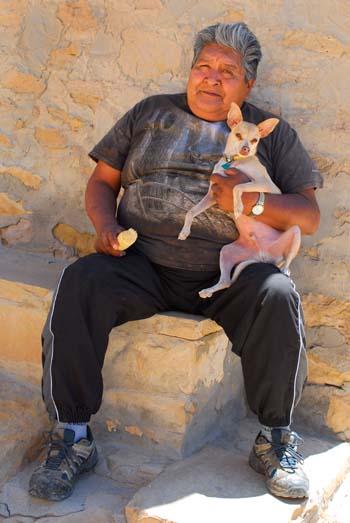 One more thing: before leaving the premises, be sure to stop at the visitor center for a meal at the Yaak’a Cafe, which serves traditional pueblo fare such as lamb stew, beans and chicos, horno bread and a variety of dishes cooked in corn husks.

4 replies on “Corn on High”

He’s there in spirit, Miles. You know, John Wayne filmed atop Acoma Pueblo, and apparently the road was paved for a Hollywood crew!

Any chance you know the recipe for that lamb stew chez Acoma??

My mom always makes a pork “chile Colorado” with toasted pasillas, but I’m not sure how to translate to lamb.

Photos on your site are just amazing. A pleasure to read.

Hi Colin,
Thanks for commenting and sorry for such a belated response. I don’t have a recipe for that particular lamb stew, but I do believe my Native American cookbook has a recipe for a similar lamb stew. I’ll look it up when I get back to my kitchen library. But that won’t be for a couple of months….