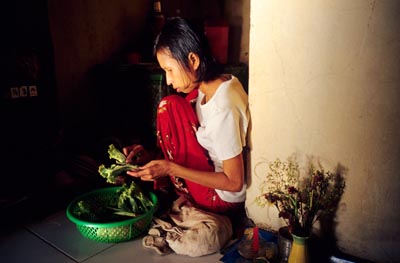 Heng Phala is shown preparing lunch in the cooking corner of the apartment she shared with her son and mother. This photo was taken in 2004, when Phala had been HIV positive for about two years before she began taking medicine in preparation for ARV treatment. Phala thought she had been infected by her husband, who left her. She died the following year, leaving her 2-year-old son in the care of her mother, who lived in a crowded neighborhood on the edge of Phnom Penh. When we last saw them, Phala’s mother worried about feeding her grandson.

All this month, Words Without Borders is running a special issue on food. When the editors of the WWB Blog asked me to write about Cambodia, I thought first of hunger. Certainly, I have indulgent recollections of Khmer soups and curries, grilled fish and banana-flower salads and the sweetest mangoes of February. But when I think Cambodia and I think food, I almost instinctively think hunger. Hunger, because itâ€”more than sweet or sour, bitter or saltâ€”is what so many Cambodians taste first in the morning and last at night.

I remember meeting a social worker named Kim Sophornn, who works with villagers who suffer from mental health problems. I wrote about Kim in my book, and about something he told me that has stuck with me ever since: 70 percent of Cambodians worry about what they will eat tomorrow, 25 percent worry about food next week and only 5 percent never worry at all. When most Cambodians think about food, they think about survival.

5 replies on “Cambodia Wants to Eat”

Karen, I came over to ask you about the name of a Cambodian dish (my aunt had learned the recipe from her Cambodian students years ago, but never did get a proper name). Instead, I followed your link to the story of these sad children living in hunger from day to day.

Nikki, thanks for following the link. What was the recipe?

Well, here’s what she tells me is in the recipe: 1 whole peeled lemon, 1 can coconut milk, 2 cups water, 2 bananas, 1 large onion, 1 clove garlic, 1 cup finely chopped lemon grass, 1-1/2 cups fish sauce, 1-1/2 cups chopped peanuts, 2 tablespoons of some kind of curry base. It’s cooked in a large (electric) pot at the table and diners dunk seafood or thinly sliced beef to their preferred level of doneness. Eaten with rice noodles and a variety of herb/greens. Sort of a Cambodian fondue. I’m curious about its name and what the original ingredients might have been.

Your story of Cambodian hunger still lingers in my mind. My parents often go to Vietnam (mostly the north) and return full of stories of need and lack, as well.

Sounds like you’re talking about ya hon, yao hon, yao hawn, or some spelling variation thereof. It’s a popular party dish (throughout the region) that seems to go hand in hand with beer and singing. I’ve heard of numerous ways to make it, and people are adamant about their favorite ingredients – beef, shrimp, squid, quail egg, cabbage, trow-koon (water spinach), watercress, corn. In fact, the only consistency seems to be the variation in how people like it best. I’m amazed at how many Khmer forums go on and on about the intricacies of this dish (one example: http://www.khmerlife.com/Forum/Thread.aspx?ThreadID=10389&Page=6).

I think that’s it, Karen. I’ve searched using the variations on the term you gave and have seen several photos that look a lot like the thick soupy broth we had. Thanks!